England skipper Farrell puts past rows behind him 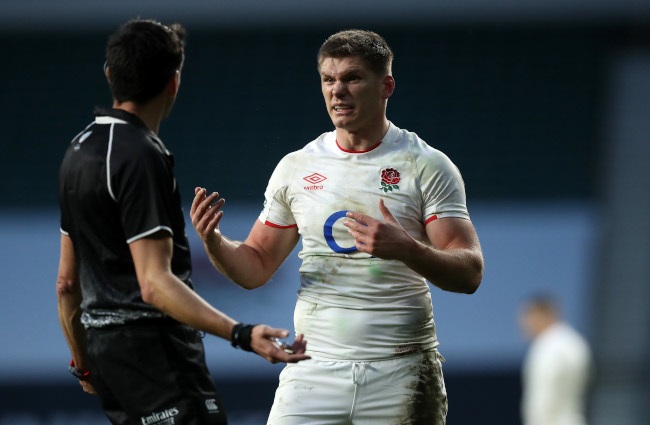 Owen Farrell has insisted he won't be distracted by the flak that has come his way when he leads England out in their Six Nations clash against France at Twickenham on Saturday.

This edition has seen the England captain facing calls to be dropped from the team, with the Saracens' playmaker's leadership skills called into question.

An uninspiring defeat by Scotland in reigning champions England's tournament opener saw Farrell criticised for ignoring a huge overlap and kicking the ball away.

Meanwhile, a loss to Wales in Cardiff last time out saw Farrell struggling to get on the same wavelength as referee Pascal Gauzere, with the visitors conceding numerous penalties, even if the Frenchman later admitted he had erred in awarding the Welsh two first-half tries.

"I don't think I dwell on it," Farrell told reporters on Thursday, with England's hopes of a successful title defence having all but evaporated.

"You soon come to realise what's important and how you learn from things, take them going forward and put everything into the next thing.

"If you hold on to things for too long you take your eye off what's actually going on now and what you can do to be in this week and be in the preparation for this game.

"I understand people have opinions. That's fine. We are obviously going through a process of how to get the best out of ourselves and that's more what we are focused on."

Elliot Daly, a club team-mate of Farrell at Saracens, has been dropped by England coach Eddie Jones after a below par display against Wales, with the British and Irish Lions man's place at fullback taken by Max Malins.

Having flourished at Bristol after a loan move from Saracens, the 24-year-old Malins is now set to make his full England debut against title-chasing France after six appearances off the bench.

"He's gone to Bristol in a year that's been brilliant for him and gone through the roof in terms of having regular game time and showing how good he is consistently," Farrell said of one-time flyhalf Malins.

"Max is a dangerous fullback. He makes things happen.

"He's quick and he's strong and he's got a great instinct about the game, which is a brilliant quality to have."

We live in a world where facts and fiction get blurred
In times of uncertainty you need journalism you can trust. For only R75 per month, you have access to a world of in-depth analyses, investigative journalism, top opinions and a range of features. Journalism strengthens democracy. Invest in the future today.
Subscribe to News24
Related Links
France set for 'immense challenge' against England after Covid crisis
Franco Smith's Italy take on Six Nations leaders Wales with more than pride at stake
Duane Vermeulen honoured by peers as Players' Player of the Year
Next on Sport24
Six Nations chief says no plans to add Springboks to northern hemishpere showpiece

Choose your newsletters
Voting Booth
What are your views on the World Rugby men's Player of the Year nominations for 2021 not including any Springboks?
Please select an option Oops! Something went wrong, please try again later.
It's a disgrace! Both Siya Kolisi AND Eben Etzebeth should have been nominated!
39% - 5487 votes
Siya, at the very least, should have been included after a superb season
7% - 934 votes
Etzebeth has been SA's best player this year and should feel hard done by
20% - 2845 votes
Get over it! Moaning about this just sounds like sour grapes!
34% - 4689 votes
Previous Results
Showmax
The story of a legend: Sir Alex Ferguson