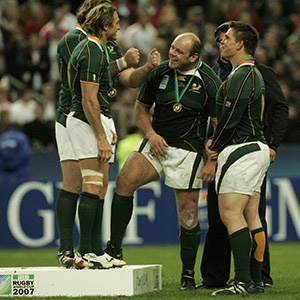 The 15-12 extra time win over New Zealand at Ellis Park in 1995 will go down as one of the iconic moments in the country's sporting history, but there was more joy to follow in subsequent years when the Boks beat England 15-6 in Paris in 2007 before defeating the same foes 32-12 in Yokohama in 2019.

With sport currently in lockdown due to the coronavirus, Sport24 felt it fit to look back at the three victorious outfits by picking a Springbok 'World Cup Final XV' from the three finals.

The team features only those players who started in the respective finals, while the bench comprises a mixture of starters and substitutes.

Perhaps to the surprise of some, I couldn't find too many spots for the heroes of 1995, with Jake White's 2007 Boks dominating the starting XV.

Important to note: The team was NOT picked on purely one-off performances in the respective World Cup finals, but a general overview of the players' Springbok careers.

Do you agree with the team selected? Let us know your thoughts at mysport@sport24.co.za

After picking "Monty" in my greatest Springbok XV of the professional era a few weeks ago, I cannot now change my mind.

The 102-Test veteran kicked 12 of South Africa’s points in the 2007 win at the Stade de France and was a standout in the tournament with his prestigious boot. In the days when rugby players still kicked 'torpedoes' (kicking a ball with a spiral, giving it considerably more distance), there was no better exponent of this than Montgomery.

Such a tough call, but the Sharks flyer is the best all-round right-wing. The 70-Test winger was deceptively quick, was solid under the high ball, a good defender and a decent tactical kicker.

Fourie is one of the best centres ever produced by South Africa. His organisation on defence and eye for a gap made him one of the leading outside centres in world rugby.

A versatile player who could also play flyhalf, Le Roux was immensely skilful, had a prodigious boot and was a remarkable defender for his size - 1.75m and 80kg.

A Springbok legend and easy choice. A try-scoring machine with 67 dot-downs in 124 Tests.

Pollard is for me the most complete Springbok flyhalf of the three options. His calm demeanour was vital in last year's World Cup win. Aside from a sound kicking game, Pollard's physical presence and ability to attack the gainline set him apart from other contenders.

You have to be pretty darn good to eclipse the great-late Joost van der Westhuizen, but Du Preez's tactical genius gives him the nod at scrumhalf. Always calm under pressure, Du Preez was vital to the Springbok cause for over a decade. The sign of a good player is always one who appears to have a lot of time under pressure and Du Preez was exactly that.

A hard-as-nails eighthman who should always be one of the first names on a coach's team-sheet. He was a key cog in the 2019 World Cup triumph and will go down as an all-time great.

Without doubt the best rugby player on the planet in 2019 and fully deserved his World Rugby Player of the Year accolade. Du Toit's versatility - he can also slot in at lock - makes him a certain starter.

A Springbok legend of 86 Tests and one of the hard men who put his body on the line for province and country.

A great leader and a genius at lineout time. He will go down as an all-time great and it's incomprehensible to omit a player with the record number of Springbok caps - 127.

The burly lock's physicality is right up there with his predecessor Bakkies Botha, but the former is a more mobile and skilful player and therefore gets a starting spot.

He just pips Frans Malherbe for the starting tighthead position. One of the best technical scrummagers the game has seen.

Smit's leadership and scrum prowess saw him keep Bismarck du Plessis out of the starting XV in 2007. The 111-Test veteran will also lead this team.

A legendary 80-Test loosehead prop and one of only two Springboks to play in two World Cup finals.

He would have been my starting hooker (as was the case in my "greatest Springbok XV"), but no team would mind his presence on the bench. Just edged Malcolm Marx (2019) and the perfect man to bring on with the game on a knife’s edge.

No-one better for loosehead cover than "Beast" with 117 Test caps.

I picked Malherbe ahead of Swart on the bench in my "greatest Springbok XV", but for this bench role I feel the powerful 2019 winner would be a more powerful impact prop.

Would be a like-for-like replacement for Etzebeth.

A hard as nails flanker but Kruger had a great all-round game with a terrific skillset. He was dubbed the "silent assassin" as he did his talking on the field. His life was tragically cut short when he died of brain cancer, aged 39 in 2010.

The late former scrumhalf was world-class. He boasted a terrific pass, immense speed and was a fearless defender. Started 78 of his 89 Tests but would be a valuable "supersub".

The other Springbok to play in two World Cup finals. Could easily have started but his prodigious boot and versatility make him the ideal backline replacement.

A terrific finisher with pace to burn, one of only two Springbok try-scorers in World Cup finals, 1.7m pocket rocket also punches well above his weight on the defensive front.

We live in a world where facts and fiction get blurred
In times of uncertainty you need journalism you can trust. For only R75 per month, you have access to a world of in-depth analyses, investigative journalism, top opinions and a range of features. Journalism strengthens democracy. Invest in the future today.
Subscribe to News24
Related Links
World Rugby outlaws tries against post protector
Stonehouse: Excessive contracting comes back to bite local rugby
Kings offer Rory Duncan R2m despite cashflow crisis
Next on Sport24
Nyakane relaxed on Bok prep as Rainbow Cup doubts bite: 'You play the cards you're dealt'