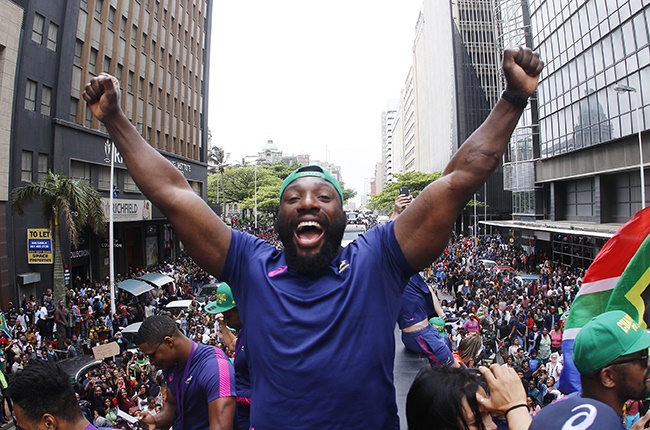 Tendai 'Beast' Mtawarira's late career resurgence proved vital in the Springboks claiming a third Rugby World Cup title, but the legendary prop might not have been part of that grand culmination in Japan last year.

The 34-year-old, who ended his international career as South Africa's most capped prop, revealed to Dr Dean Allen, host of weekly Players' Fund virtual events, that the national team's barren period between 2016 and 2017 under Allister Coetzee made him consider calling it quits.

Coetzee's tenure on yielded 11 victories from 25 matches - the win percentage of 44% is the lowest by any national coach post-isolation - and also included record defeats to the All Blacks, Ireland and Wales as well as a first ever loss to Italy.

"If you look back at 2016 and 2017, it was considered one of the worst few years of Springbok rugby. We were losing consistently," Mtawarira told the historian and author.

"I was one of the few players from the previous generation to be present, guys like Victor Matfield had left and Bryan Habana was also winding down. I was the last member of that group and I just felt that this isn't what I'm used to.

"The Springbok brand stands for excellence and it was becoming unacceptable for us to be performing this way. I remember actually contemplating retiring. How we were going at the time was just not part of who I am."

Mtawarira specifically remembers how sombre the atmosphere at OR Tambo international airport had become when the national team returned from overseas assignments, particularly when contrasted with the joyous celebration of the World Cup homecoming.

"To come back and see fans who support the Boks and have to endure such terrible on-field losses (was a humbling experience)," he said.

"But going through all that pain as a squad brought us together."

Mtawarira persevered and returned to the Sharks and Boks with renewed vigour, spurred on by a national coach in Rassie Erasmus that was willing to deal with harsh realities.

"Rassie came in with a plan. He was very honest, told us that this is where we are in world rugby and this is how we're going to fix it. He pointed out that there were a lot of things wrong with South African rugby and that people aren't working together to contribute to the ultimate success of the Springboks," he said.

"He was so detailed and addressed everything, particularly issues like transformation. Rassie is willing to talk about elephants in the room, things that other coaches I can tell you for a fact didn't want to discuss. They ran away from it."

Inspired, the Boks' core of seniors spearheaded the change in attitude as the players bought into Erasmus' vision.

"We told each other to work harder and become desperate again to play for the Springboks because it's a huge honour, the biggest of one's playing career. We were reminded that the Springboks have won big before," said Mtawarira.

"I was in 100% all the way. We all worked hard and when we came together, everyone knew what was expected of them.

"The World Cup was just a whole lot of things coming together, Rassie's influence and Siya's (Kolisi) stature. Everyone has so much respect for him, he leads from the front. Pretty incredible."

We live in a world where facts and fiction get blurred
In times of uncertainty you need journalism you can trust. For only R75 per month, you have access to a world of in-depth analyses, investigative journalism, top opinions and a range of features. Journalism strengthens democracy. Invest in the future today.
Subscribe to News24
Related Links
Former Blues, Junior All Blacks flyhalf joins Hurricanes
Daily shot of Express-o - MyTwoCents
Former Springbok Ashley Johnson joins third-tier English club as player coach
Next on Sport24
Referees revealed for Springboks' end of year tour, SA's Jacobs to make Test debut