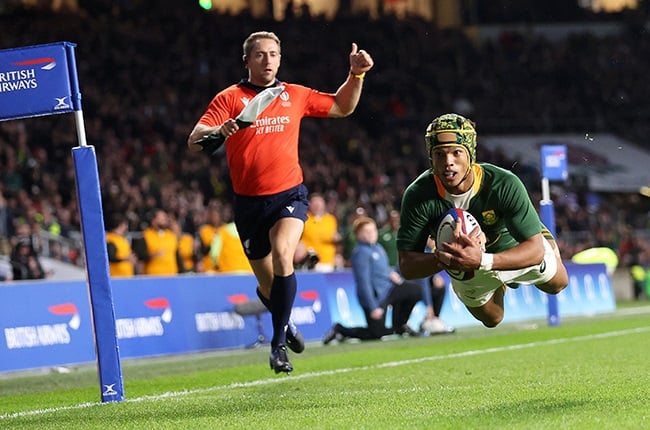 AFP Sport picks out some new faces whose displays suggest they could be major players in the sport's showpiece:

From the wreckage of their historic defeat against Italy, he emerged as one enormous positive. Easy to spot with his mop of curls, the 22-year-old impressed against world ranked number one side Ireland. Then with so many experienced players missing against Wales, and trailing 34-13, he shone in what was only his third Test. He scored two tries and was pivotal in the game-winning one to cap an extraordinary comeback.

Nawaqanitawase is not just a finisher. Something of a free spirit, it is his ability to drift in from his wing and pop up in the centres that caused mayhem in the Welsh defence. "The boys never lost belief," he said - he turned that belief into reality and it could be the turning point for Dave Rennie's side.

The Leinster man looked immediately at home in Test rugby when he replaced injured centre Stuart McCloskey in the first-half of the 19-16 win over world champions South Africa.

More crucially for both his and Ireland's Test future, the 25-year-old showed he can play in several positions as he started at fullback against Fiji then the wing against Australia.

O'Brien, who like his provincial and international team-mate Hugo Keenan, came through the sevens set-up, showed himself strong in defence, and his powerful left foot kicked the Irish out of trouble on several occasions.

Whether his strength of being able to play several positions is also his weakness in gaining a regular starting spot head coach Andy Farrell is delighted to have added competition in the backs.

"He has all the hallmarks of a great, composed international player," said Farrell.

"Somebody who can do what he does in many different positions, he doesn't flap around panicking about moving positions."

Welsh rugby fans may prefer Morgan to stop scoring two tries in a Test match for on both occasions they have ended up losing - the historic defeat to Georgia and then Saturday's morale-sapping collapse against Australia.

The 22-year-old backrow forward, though, has been a rare bright spot for the Welsh this year and more than held his own starting alongside the vastly more experienced Justin Tipuric and Taulupe Faletau.

Coach Wayne Pivac's predecessor Warren Gatland described Morgan as "a one man wrecking ball" against the Wallabies. Aside from his brace of tries he carried for over 100 metres and made 11 tackles.

His rise to Test rugby is all the more remarkable given he was discarded by the Scarlets Academy and mixed playing for Aberavon with an engineering apprenticeship.

Those hard yards seem to have served the Ospreys man well and he could cause all sorts of problems for Wales's opponents at the World Cup next year.

The 26-year-old winger showed he is a first class finisher, scoring tries in all four Tests - including two against Italy with his performance labelled as "outstanding" by head coach Jacques Nienaber.

The former sevens star has rewarded the faith Nienaber has shown in him since his debut in the 13-12 defeat by Wales in July and has given the head coach a welcome selection headache.

"We've got some exciting outside backs and you can also measure Mapimps (Makazole Mapimpi) in there," said Nienaber.

"We've had a good group that's developed over this year, and you also have to factor in Canan Moodie. We've got nice competition there."

Arendse, though, has thanks to a stunning November stolen a march on his rivals.