Rassie Erasmus banned from all rugby for 2 months, given match day ban until September 2022 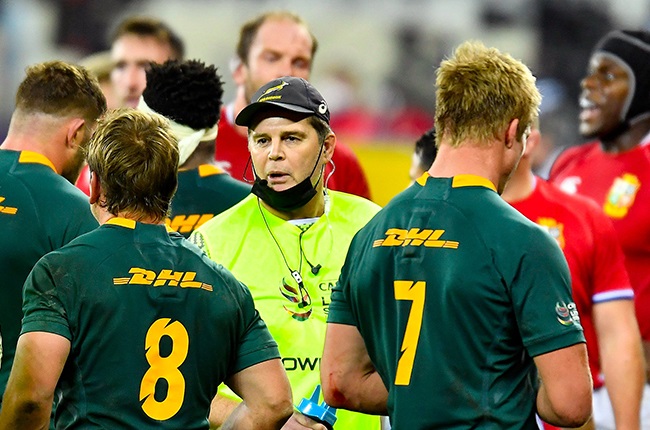 SA Rugby's director of rugby Rassie Erasmus has been banned for two months from all rugby with immediate effect, World Rugby announced on Wednesday, adding that he would be banned from match day activities at all levels until September 2022.

Erasmus was found guilty on all six charges brought against him after he compiled a 62-minute video in which he hit out at Australian referee Nic Berry's and TMO Marius Jonker's officiating during the Springboks' first Test loss to the British & Irish Lions in July.

The 49-year-old's charges were listed as follows:

"Having considered all the evidence, including oral evidence from the match officials, Rassie Erasmus, SA Rugby, World Rugby, and submissions from the parties the committee found all six charges against Mr Erasmus proved," World Rugby said in their statement.

The sanction means Erasmus is suspended from all match day activities, including coaching, contact with match officials, and media engagement, until 30 September 2022.

"He [Erasmus] may then (after two months) return to his Director of Rugby duties but must continue to serve a 'match day' ban until 30 September 2022, which will therefore include the SA Senior Men’s inbound tour by Wales in July and the 2022 Rugby Championship," the World Rugby governing body said.

"That 'match day' ban will remain in place and covers all Rugby Union at whatever level. It would prohibit, therefore, participation in that way at club or provincial level."

Erasmus was also issued with a warning about his future conduct and forced to apologise to the relevant officials.

SA Rugby, who were charged alongside Erasmus, received a £20,000 fine and were also handed a warning on future conduct and made to apologise to the affected officials.

Choose your newsletters
Voting Booth
What are your views on the World Rugby men's Player of the Year nominations for 2021 not including any Springboks?
Please select an option Oops! Something went wrong, please try again later.
It's a disgrace! Both Siya Kolisi AND Eben Etzebeth should have been nominated!
39% - 5627 votes
Siya, at the very least, should have been included after a superb season
7% - 939 votes
Etzebeth has been SA's best player this year and should feel hard done by
21% - 2958 votes
Get over it! Moaning about this just sounds like sour grapes!
33% - 4787 votes
Previous Results
Showmax
The story of a legend: Sir Alex Ferguson