Catrakilis most recently played for the Southern Kings in the 2019/20 PRO14, which was suspended in March due to the coronavirus pandemic.

The 30-year-old announced his retirement from professional rugby last week and told Sport24 in an exclusive interview that he will now join his family's insurance brokerage business.

In the wide-ranging interview, Catrakilis was also probed on who the biggest challenger for Pollard is.

He responded: "Pollard still has the inside lane for the Springboks because he finished the World Cup as the incumbent flyhalf. However, I foresee a lot of competition at flyhalf over the next few years. Curwin Bosch had a brilliant last season and for me is the best kicker in South Africa, especially out of hand."

Before Covid-19 halted the 2020 Super Rugby season, Bosch had made the Sharks' No 10 jersey his own and was the competition's leading points scorer.

"In the past, he has been criticised for his defence but a flyhalf's job is not really to defend. In tight games, you want a No 10 who can control the game, especially with his boot. Bosch still has quite a bit to learn when it comes to creating for others and releasing the line," Catrakilis said.

He added: "With time he will learn that because he hasn't played much at flyhalf. I think he has all the skills to emulate the likes of Romain Ntamack, Owen Farrell and Richie Mo'unga, who I rate as the best flyhalves in the game today.

"With a little more practice and understanding of what he needs to focus on before kicks, I believe Bosch can easily become an 85-90% kicker. It's not one size fits all when it comes to kicking as everyone has their own style. As a kicker, it's very important to improve and not just maintain. Once you figure out what you need to work on, kicking becomes pretty simple. Once Bosch achieves that, it's going to be very difficult to keep him away from the Springbok flyhalf berth."

During his career, Catrakilis also represented the UCT Ikeys, Western Province, Stormers, Montpellier in France and Harlequins in England.

His career highlights included winning the Varsity Cup with UCT in 2011 and the Currie Cup twice with Western Province in 2012 and 2014. 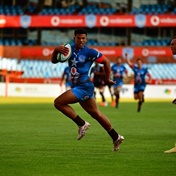