Ex-Springbok on former coach Carel: 'He was ahead of his time' 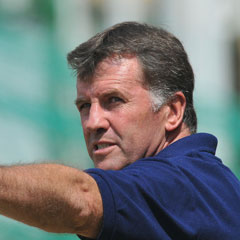 Carel du Plessis was ahead of his time as a coach and would've fared better had he coached in today's game.

That is the view of former Springbok scrumhalf Werner Swanepoel, who spoke exclusive to Sport24 this week.

Du Plessis, known as the Prince of Wings during his playing days, was appointed Springbok coach at the relatively young age of 36 in 1997 - despite have little coaching experience at the time.

He oversaw the 2-1 series loss to the British & Irish Lions and the 1997 Tri Nations tournament in which the Boks won only one of their four games.

The Boks thumped the Wallabies 61-22 in Pretoria in Du Plessis' final game before he was replaced by Nick Mallett.

Swanepoel, who played under both Du Plessis and Mallett, said the former may not have deserved enough credit for his coaching philosophy.

"I believe Carel was ahead of his time. If I think about what he did with us back then and what the guys are doing now, it’s almost exactly the same. He was very technical. We went through a lot of team tactics and video sessions.

"In his autobiography, Bulletproof, James Dalton writes that Carel was 'a remarkable rugby player but he had no clue about coaching an international rugby team.' I feel that's harsh but everyone has their opinion. Carel and Gert Smal were the first Springbok coaches I played under and made me a Springbok so I’m very grateful to them," Swanepoel said.

Du Plessis, who is currently battling cancer, was also a Western Province and Stormers assistant coach alongside Gert Smal in the early 2000s.

His son, Jean-Luc, is currently part of the Stormers' Super Rugby squad, as well as his nephew Daniel du Plessis, who is the son of Carel's brother and fellow Springbok, Michael.

"I agree with Bullet in terms of Nick being the best. I basically played my whole Test career under Mallett and have a helluva lot of respect for him.

"Every player just wants to know where they stand with a coach and that's what Nick and Rassie (Erasmus) did so well. Don't tell me on Monday I'm good and then on the Wednesday tell the other scrumhalf he’s better. As a coach just be honest...

"Mallett's contentious move was dropping Gary Teichmann for Bob Skinstad and making Joost captain for the 1999 World Cup. There have been documentaries made and interviews recorded on that subject and everything that was supposed to be said has been. Nick admitted he made a misjudgement but in hindsight it’s always easy to say. Having won 17 consecutive Tests, I think we were good enough to win the World Cup. However, the exclusion of Teichmann had a huge impact on the team as he was our leader for a long time. It’s now water under the bridge but sadly myself and many of the guys from that era can’t say they won a World Cup."

We live in a world where facts and fiction get blurred
In times of uncertainty you need journalism you can trust. For only R75 per month, you have access to a world of in-depth analyses, investigative journalism, top opinions and a range of features. Journalism strengthens democracy. Invest in the future today.
Subscribe to News24
Related Links
WATCH | Stormers in lockdown: Week 4
Bok centre fined, cops 2-week ban for signing with 2 clubs
Teichmann: Am captaincy a 'masterstroke' from Sharks
Next on Sport24
EXCLUSIVE | Oregan Hoskins says SA Rugby rejected own legal advice to suspend Jurie Roux