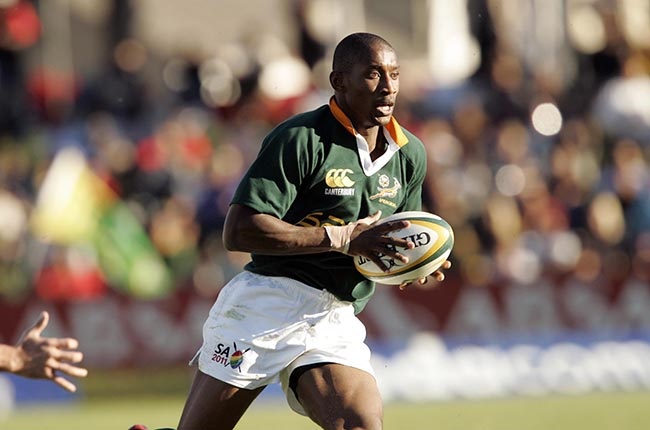 Tonderai Chavhanga in full flight for the Springboks.
Lee Warren/Gallo Images
Sport24 asked: How will you remember the late Kaunda Ntunja?

Tonderai Chavhanga: It’s really hard to believe that Kaunda is gone. It’s so sad for his young family who have lost such an incredible man. I first met him when I was in Bloemfontein playing for the Cheetahs and we lived together in the 'Cheetahs Huis'. I remember when we were coming back from a tough session you could always count on him to lift your spirits and re-energise you. He had such a positive view on life and was someone with so much potential on the rugby field. Unfortunately, he didn’t end up playing for the Springboks as it seemed like it was destined to be but he made such an incredible transition to the commentary box. His name really became synonymous with the Xhosa commentary and he drove Phaka which was one of the most popular shows on SuperSport. Kuanda created his own opportunities and has left a legacy. I think it’s a great lesson for the youngsters out there. Kuanda did not end up playing for South Africa but he lived a Springbok type of life because he epitomised success. He was the best in his chosen field... It was a really sad week for South African rugby in losing two legends in Kaunda and Paul Dobson. I didn’t have that many interactions with Paul but so many people have good things to say about him. In life, whether you are young or old you never know when your day is coming. It’s quite painful when a young person like Kuanda, 38, dies but as much as Paul, 84, lived to a ripe old age, those that were close to him are missing him equally as much as Kaunda’s young family are.

Sport24 asked: Your views around the Black Lives Matter movement?

Tonderai Chavhanga: I definitely stand in solidarity with my American brothers and sisters in terms of Black Lives Matter. However, when it comes to South Africa and Africa as a continent, our biggest problem is the corrupt governments we have elected. If they had done their jobs we would not be fighting for equal opportunity in 2020. At the end of the day, there is this misconception that when people say Black Lives Matter, other lives don’t matter. At the heart of it, Black Lives Matter is about equality and black people wanting to be treated the same in the eyes of the law as well as wanting an opportunity to participate in the economy. Somewhere along the line the narrative has been hijacked by the wrong people, making it seem like Black Lives Matter means no other race’s life maters. As a result it has become a source of division as opposed to unity. We need to root out racism and discrimination but, from an African perspective, we really need to hold our governments to account. We are in this mess because of them and it infuriates me to see how people are suffering as a result. Siya Kolisi did a phenomenal job articulating exactly how he felt and it came from his own experience. He mentioned having to look for food and work as a young boy and unfortunately 20 years on, millions of kids are experiencing the same struggles and the courts even had to order government to feed children during the lockdown. Politicians need to start realising that the lives of the people who’ve elected them into power matter.

Sport24 asked: How have you dealt with racial abuse on social media?

Tonderai Chavhanga: Someone can say whatever they want to but I’ve got to own my feelings. I know who I am and I don’t need anyone’s validation to make me feel better. I live by my convictions and I will express my views whether people agree with them or not. When dealing with attacks on social media, at times I have to calm myself down. I make a note of not responding when I’m upset because otherwise you lose all objectivity. People have misconceptions about each other based on race and we need to explore ways to find common ground. I feel we have so much to gain working together rather than being divided.

Sport24 asked: What would it mean if South Africa exited Super Rugby?

Tonderai Chavhanga: It would be a shame if South African teams no longer competed in Super Rugby. To be honest, I can’t think of Super Rugby without South African teams being involved. However, from a commercial standpoint, I think it makes sense to go up north and the same can be said when it comes to the travel arrangements. As former players, we look at it from a sentimental point of view and the rivalry particularly between South Africa and New Zealand is a special one. But if South African teams were to venture north, the rivalry between South Africa and New Zealand on the Test front would be an even bigger one. Covid-19 has changed the way we do things and if it proves the catalyst to South African teams moving up north then so be it. However, we have to bear in mind that there is still the Sanzaar agreement in place, so everybody has to stick to their end of the agreement.

Sport24 asked: What do you make of Jake White’s Bulls revolution?

Tonderai Chavhanga: One thing I know about Jake is that the man has got a plan. Whatever plan he is busy putting in place will be a winning one. I thoroughly enjoyed working under Jake and have known him since I was in school at Prince Edward. Jake is a loyal guy and when he backs you he will do so all the way. I have known him for nearly 20 years and he is someone who became more than a coach to me. He was so good to me and I would have done just about anything for him. I’m not a Bulls fan but for Jake I will definitely support the Bulls. (White last coached at the Sharks before leaving the union prematurely in 2014). There are always two sides to any story. Jake has his side of the story and so does John Smit. What’s important is that they put the past behind them and are on speaking terms. Jake’s return is positive for SA rugby and he has assembled a formidable Bulls team. As long as everybody is on the same page, I can’t see that marriage ending up in misery. I’m looking forward to seeing his team performing and getting the Bulls back to playing winning rugby.

Sport24 asked: What is your take on Chiliboy Ralepelle’s ban?

Tonderai Chavhanga: Chiliboy Ralepelle was certainly a very talented rugby player from when he was young and was tipped to be a top Springbok. It’s sad to see that his professional playing career seems to be ruined. However, he is appealing the eight-year ban handed down to him by Saids. The fact that he tested positive for a third time makes it difficult to defend. However, with your career finished why would you want to spend thousands of Rands defending yourself and appealing the decision if you knew that you were guilty? It’s really sad that his career didn’t pan out as it was supposed but professional players should know what substances they are putting in their bodies. It’s their livelihood and they have to take ownership of whatever they consume. In terms of Aphiwe Dyantyi, we have spoken a few times. He is a good young man with a bright future ahead of him and is certainly working very hard in terms of keeping in shape and using this period to prepare for life after rugby. Hopefully when he has served his time he will pick up where he left off on the field... The South African schoolboys today are massive and whether they are taking Vitamin-C or S is a different story. Kids today are under immense pressure to perform and based on what I have heard, some coaches and parents pressure them into using banned substances. If that is the case, I hope the authorities can really sort it out because what kind of lessons are we teaching our kids if we are promoting cheating as a way of winning at all costs? As parents, it is our duty to teach our children to live under some sort of moral code.

We live in a world where facts and fiction get blurred
In times of uncertainty you need journalism you can trust. For only R75 per month, you have access to a world of in-depth analyses, investigative journalism, top opinions and a range of features. Journalism strengthens democracy. Invest in the future today.
Subscribe to News24
Related Links
'He's a Rooster' - Sonny Bill Williams set for Sydney return
Eben Etzebeth pens new 3-year Toulon deal
Chiliboy Ralepelle appeal: Allegations of false evidence and doping control errors
Next on Sport24
Springboks will have 'unconventional' water-boy Rassie back on European tour

Choose your newsletters
Voting Booth
After the opening weekend of URC action, what did you make of the South African struggles?
Please select an option Oops! Something went wrong, please try again later.
It exposed the quality of South African rugby...
38% - 2066 votes
There were positives to take
7% - 362 votes
We shouldn't read too much into one weekend
17% - 900 votes
It will take the SA sides time to adjust to the new competition
39% - 2088 votes
Previous Results
Showmax
The story of a legend: Sir Alex Ferguson