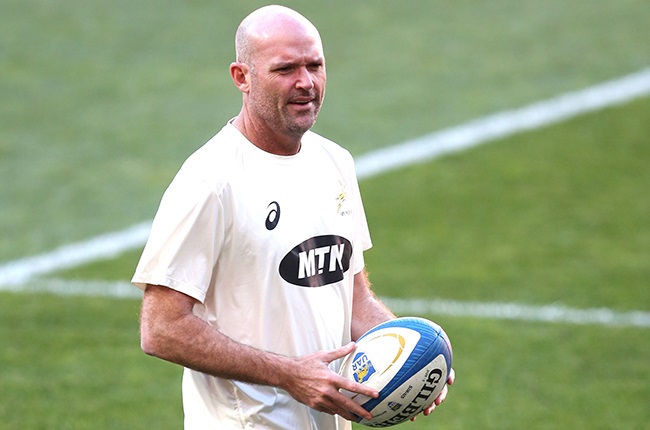 Springbok coach Jacques Nienaber admitted they didn't make the best use of their opportunities despite their 23-18 win against Wales in Cardiff on Saturday.

The Boks scored one try through Malcolm Marx and spent large parts of the game on the front foot, but didn't have the points to show for their efforts.

Nienaber said they were better in the second half, but should have done more with what had come their way.

"When we get into the 22, we have certain things that we want to achieve there and in the first half, we didn't use them," Nienaber said.

"It wasn't perfect, but we rectified them in the second half, but we still left a couple of those opportunities on the field.

"We were definitely better in the opportunity conversion rate in the second half as compared to the first half."

One of those chances that passed by the Boks was Makazole Mapimpi's try. That one was a case of the touch-down being disallowed because of lock Eben Etzebeth being offside.

If the Boks were awarded that try, they would have pressed Wales into a corner and come back with a bigger winning margin.

Nienaber though said the match officials would have been in a better position to make a decision.

"The disallowed try was one of the opportunities that we created, but did not finish," Nienaber said.

"It was a technical call and the referee would have been in a better position to see things with the match officials and the camera angles."

Nienaber though did not try to hide his joy after breaking the Cardiff Curse that stretched back to 2014 on a night where their defence ensured the Welsh did not breach their try line.

"It's a tough place to win and our record here has shown that. It's our first win here in a long time," Nienaber said.

"We spoke about it as a team and there was a lot of work done by the players in terms of what could be done differently as other things didn't work in the past.

"We made some changes in our prep during the week and I am glad that came off in the game, so it was nice to break the hoodoo."

We live in a world where facts and fiction get blurred
In times of uncertainty you need journalism you can trust. For 14 free days, you can have access to a world of in-depth analyses, investigative journalism, top opinions and a range of features. Journalism strengthens democracy. Invest in the future today. Thereafter you will be billed R75 per month. You can cancel anytime and if you cancel within 14 days you won't be billed.
Subscribe to News24
Next on Sport
Pollard's Leicester debut lasts less than 30 minutes after Bok pivot hobbles off injured