Hoping for more 'open' Springbok Tests in Europe? Don't bet much money on it, says Nienaber 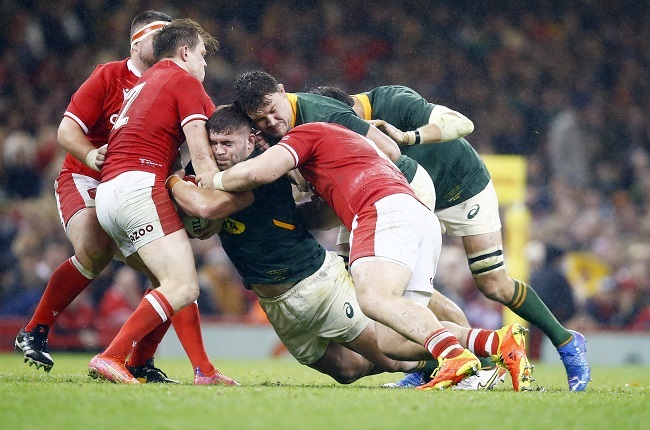 Expect more of this grind from Malcolm Marx. (Photo by Steve Haag/Gallo Images),

As much as the Springboks want to consistently unleash a deadly finisher like Makazole Mapimpi to cross the whitewash, the attrition of Test rugby means that the world champions will probably continue to grind out victories rather than gallop to them.

National coach Jacques Nienaber isn't trying to prove a point to detractors who continue to criticise South Africa's style as being "anti-rugby", he's simply being realistic.

"If you look at Wales, they're the Six Nations champs. They lost one game against France and would’ve won a Grand Slam if that result was reversed," he said on Tuesday.

"They're a quality team with lots of experience. When you're playing away from home in the northern hemisphere, you're going to have to grind out wins against its teams."

A popular counter-argument - whether it's a good one is debatable - is that the Boks' 23-18 victory last week against the Dragons was dwarfed by the All Blacks' 54-16 victory the week before.

Yet which team is the only in 2021 to have beaten Ian Foster's troops (and only lost by two points the previous week) in a year that's basically amounted to nothing in terms of competitiveness for the world's favourite "attractive" side?

Winning rugby is all that matters.

And even if a more adventurous Scotland side - whom the Boks face at Murrayfield on Saturday - suggests a more open spectacle than last week in Cardiff, there's no guarantee it will materialise.

"It's the same with Scotland. In their last seven games, including the Six Nations, they’ve only lost two games. They lost to Ireland away and we all know it’s always tough to win in Dublin and lost by three points to Wales, who were obviously crowned champions," said Nienaber.

"They've beaten Australia. It's quality teams you’re playing against. It’s no longer a case of the southern hemisphere (teams) coming up here and believing you’re guaranteed a 15-point victory or that you’ll have a soft landing.

"If it’s in conditions like Saturday, it will always be a grind."

By all accounts, that's exactly how the Boks want it.

"Overall, these results attest to the quality of the opposition we're facing. We want to play teams that have their best players available and give it their all," said Nienaber.

But it doesn't mean that South Africa aren't keen on dishing up a few more five-pointers.

In fact, halfback Herschel Jantjies - who'll start in the No 9 jersey again - is more than willing to concede that the Boks wasted point scoring opportunities last week.

"Last week was very tough with the conditions," he said.

"But as a team, we just want to take opportunities when they are presented. I think we left a few points out there last week that we didn't take. We just want to be sharper."

"I felt we definitely took some of the opportunities, but there were some that we missed against Wales. We constantly try to improve our decision-making and our awareness that when an opportunity is given to us, we take it."

We live in a world where facts and fiction get blurred
In times of uncertainty you need journalism you can trust. For 14 free days, you can have access to a world of in-depth analyses, investigative journalism, top opinions and a range of features. Journalism strengthens democracy. Invest in the future today. Thereafter you will be billed R75 per month. You can cancel anytime and if you cancel within 14 days you won't be billed.
Subscribe to News24
Next on Sport24
Sports minister calls for 'urgent' resolution in Jurie Roux, SA Rugby matter

Get the newsletter
Voting Booth
Would you be keen to see the Springboks join the Six Nations?
Please select an option Oops! Something went wrong, please try again later.
Yes! The Northern Hemisphere is the future.
52% - 2298 votes
No! The Rugby Championship is still the pinnacle.
48% - 2134 votes
Previous Results
Showmax
The story of a legend: Sir Alex Ferguson