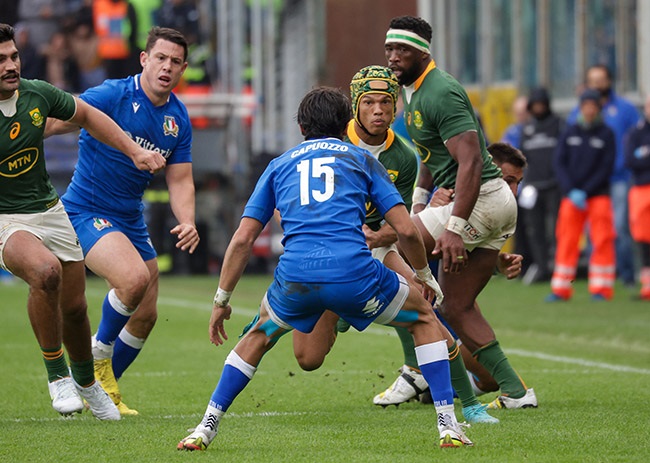 The Springboks brought high-flying Italy down to earth with a bruising and dismissive 63-21 win at a cold and breezy Genoa on Saturday afternoon.
READ FULL MATCH REPORT

They capped off a brilliant 63-21 victory over Italy with this beauty from Cobus Reinach ????#ITAvRSA pic.twitter.com/KsLCBlYncS

A terrific second half from the Springboks saw them put Italy to the sword.

The Bok backs had a field day and showed what they can do when given license to attack.

The Bok Bomb Squad also did a terrific job in the second stanza as a shell-shocked Italy were overpowered physically.

80' - Libbok chips over the CONVERSION to end the game.

79' - TRY to the Springboks as Cobus Reinach rounds off a terrific move! It was a great break from inside his own half by Arendse, before he put Reinach away...

78' - Give credit where credit is due, it's been a terrific performance from the Boks in the second half.

78' - Working in tandem, Marx and Roos win a penalty on the ground to bring defensive relief for the Boks.

First time the Boks have surpassed 50 points since Jacques Nienaber became head coach. And only the second time they've gone past 40 (first game of tenure v Georgia in 2021). #ITAvRSA

76' - Italy with an attacking chance close to the Bok tryline. They win a penalty and set up a five-metre lineout.

74' - Libbok slots the CONVERSION from out wide.

72' - TRY to the Springboks as Damian Willemse rounds off a slick backline move to go over in the corner!

Padovani leaves the field on a stretcher.

70' - A bit of a break now as Italy replacement fullback Edoardo Padovani receives attention for what looks like a neck injury. He got injured while attempting to tackle Willie le Roux from the kick-off.

69' - TRY to the Springboks as Steven Kitshoff goes over close to the posts! Helter-skelter stuff now as the game has completely opened up.

The Boks are playing some really pretty rugby today.

The chemistry between Le Roux and Libbok especially been great since the Stormers man has come on.#ITAvRSA pic.twitter.com/Imfwa9e8OG

66' - Allan also pulls his conversion attempt to the left.

65' - TRY to Italy as No 8 Lorenzo Cannone rounds off a great team try. Great interplay between the whole team there.

63' - Libbok pulls his conversion attempt away to the left.

62' - TRY to the Springboks as Malcolm Marx powers barges over after a lineout drive!

61' - Relentless pressure now from the Boks in the Italy 22m area.

South Africa have stepped up into 5th gear now.

Italy desperate for a breather but the Boks have been so accurate to start this half.#ITAvRSA

54' - TRY to the Springboks as Kwagga Smith barges over next to the posts!

It comes after relentless Bok pressure.

52' - Kwagga Smith has also replaced Marvin Orie for the Boks.

50' - A front row change for the Boks with Malcolm Marx, Steven Kitshoff and Vincent Koch all on.

50' - Libbok slots the CONVERSION from the corner!

48' - TRY to the Springboks as Kurt-Lee Arendse rounds off a terrific team try in the corner!

It was started by great counter-attacking from Libbok.

46' - Kolbe limps off with what looks like a hamstring injury. Manie Libbok replaces him.

45' - De Klerk misses the conversion from out wide.

But Kolbe is now grabbing at his hamstring, which means Faf de Klerk will kick for goal.

44' - TRY to the Springboks as Cheslin Kolbe steals the Italian ball from the kick-off to score!

44' - Allan chips over the easy PENALTY.

43' - A kickable penalty for Italy as De Klerk and Mostert are caught off-side - in front of their own kicker...

The Springboks are playing with the wind at their backs in the second stanza...

Welcome back for the second half!

Can't wait to see Roos on the field a No8 who can offload and link and incredible tackle work rate!! Watch the bomb squad!!

seeing that replay of late shoulder charge on Willie.. it is a real pity replay and TMO was not available at stadium again. but as they say cowboys don’t cry ;)

Boks tried to stretch Italy in the wider channels in the 1st half, but lost a lot of momentum when they didn't get quick ball. Arendse try well finished, as was the Capuozzo scorcher, but Boks made a lot of mistakes in Italy half. Hosts have done well to stay in fight #ITAvRSA