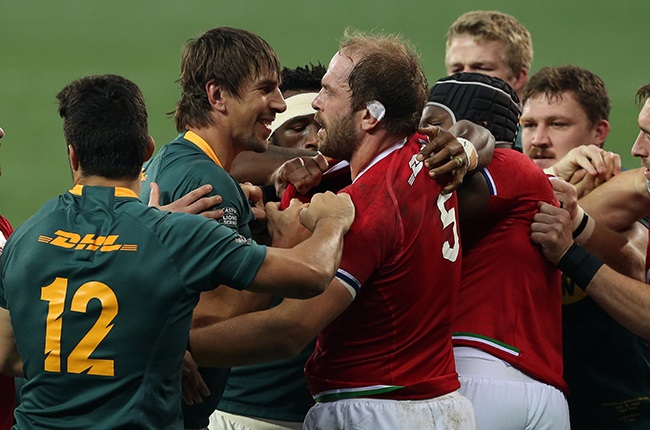 Given the awkward, sometimes downright ill-tempered nature of the Springboks' series victory over the British & Irish Lions, national coach Jacques Nienaber is realistic enough to acknowledge that next month's three-Test tour of the UK will have some additional needle.

"There will obviously be a bit of spice in our games on tour," he said, ahead of the Green-and-Gold's departure for France this weekend, where they'll be based for a week before moving on to Wales.

The Boks first assignment on the trips is against the Dragons on November 6.

"I believe our opposition will definitely be keen to rectify what happened in the series here. But we also need to take into account that we are the reigning world champions and that means that opposition will simply be more motivated to perform against us. Teams are going to come at us regardless."

From the British & Irish Lions tour

While England, South Africa's final meeting of the tour have some selection issues to sort out owing to a mounting injury list to key performers, the claims of the Welsh and Scots will be substantial.

"This Northern Hemisphere tour is going to be a big challenge for us, especially if you go and look at the squads that the coaches have selected," said Nienaber, adding:

Wales are a team that are getting eight British and Irish Lions players back and if you look at their squad they have massive experience. Of the three 10s they picked in the squad Gareth Anscombe is the least experienced and he's got 35 Test caps, the other guy is close to 50 and Dan Biggar is close to a hundred.

"Even though Eddie Jones has chosen a younger squad (for England) if you look at the spine, it's strong.

"Scotland has Ali Price, Finn Russell, Stuart Hogg, Duhan van der Merwe who all speak for themselves, so they have quality players and that will be a challenge for our outside backs."

Yet the Boks' biggest stumbling block in a quest to finish 2021 on a high might be their own demons.

End-of-year tours have become decidedly low-key for the side, with their last unbeaten trip being back in 2013 when they beat Wales, Scotland and France under Heyneke Meyer.

The burning desire to break that habit for underachievement is one of the reasons why Bok management kept their selection strategy conservative.

"We haven't won all three in almost a decade, so it is a big challenge for us," said Nienaber.

"That's also why we selected this squad. We are 20 Test matches out from the 2023 World Cup, so I think the big thing for us is to build continuity, consistency and improve our game.

"We lost a lot of momentum by not participating in any international rugby in 2020, so it’s almost trying to build on our game, get better at what we are trying to do, see where there are opportunities to evolve. Also, I think it’s a good opportunity to get used to some of the conditions we might see in 2023."