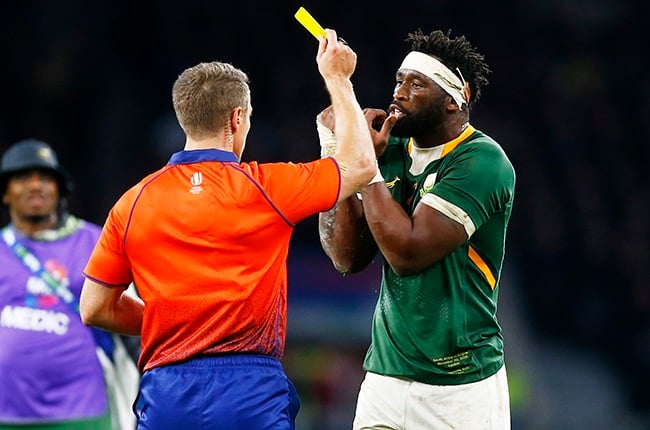 The Springboks ended their year with a bitterly disappointing 27-26 loss to England at Twickenham on Saturday in a rematch of the 2019 World Cup final.

It will hurt more given that the Boks had manufactured a 26-24 lead after they were 24-18 down with 15 minutes to play, only to lose captain Siya Kolisi to a 75th minute yellow card and then concede a late penalty to go down to the flawless boot of Marcus Smith.

It was a tough one to take after a week that had seen the international spotlight centred around Bok guru Rassie Erasmus' ban from rugby as a result of his role in a video back in July that publicly criticised Australian referee Nic Berry following the first Test against the British & Irish Lions.

As a result of that sanction - Erasmus is not allowed at a match-day venue until September 2022 - the Boks were without their 2019 World Cup mastermind at Twickenham on Saturday.

Head coach Jacques Nienaber, though, was not even thinking about using that as an excuse.

"We stayed away from that," he said after the match.

"We had to focus on England and we knew it was going to be a big challenge for us, so our whole focus was on that.

"I can't say that it had any influence."

Nienaber was also satisfied with the performance of referee Andrew Brace, and while Kolisi opted not to comment on his yellow card, Nienaber had no issues with the officiating on the day.

"No. It's something we will have to look at and we always do in terms of getting alignment with the referees and the pictures they see and that we see," said Nienaber.

"The key thing is doing that alignment is to basically get a better product for the spectator. The more we are aligned with our refs, the less we will make errors and there will be less penalties and more ball in play time.

"That's something we always do, because we would like to get a better product out there.

"I've got no issues with the refereeing and the team of four [match officials]."

Nienaber said he was disappointed at losing another match this year in the closing stages - there were two in the Rugby Championship - and he acknowledged the ability to get over the line as a work-on for 2022.

"It's disappointing, and it's the third Test this year that we've lost this way when we were like 78 minutes in the game and we were leading by a point or two and then we don't finish the game," said Nienaber.

"That's something that we will have to look at and improve at."