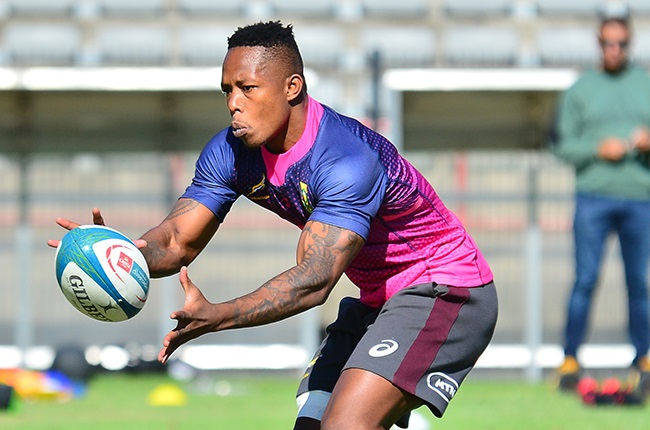 News24 can exclusively confirm that Springbok wing Sbu Nkosi has been found.

The Bulls wing was located at his father's house in Emalahleni, Mpumalanga, on Monday afternoon.

Bulls CEO Edgar Rathbone, in tandem with the team's security company SSG Group, managed to locate the 26-year-old after receiving various tip offs that he was in Emalahleni.

Nkosi had been reported missing for three weeks by his franchise, who on Saturday opened a missing persons case with SAPS.

Initial information that reached the Bulls said the Springbok was at an "ANC house" in Emalahleni, where he was allegedly seen "driving a white caravan" - information that was only partially true.

Rathbone and SSG extensively sought to verify the information and look for Nkosi, whom they weren't able to reach telephonically.

But by Monday morning, the Bulls had not verified that Nkosi was alive or safe despite some media reports that the player was found.

Both parties, unsuccessfully, attempted to get SAPS Emalahleni assistance upon arrival in the Mpumalanga town out of security concerns.

However, it transpired that Nkosi was, in fact, safe and at his father's house in Emalahleni.

After patiently waiting outside the home for Nkosi's appearance, Rathbone at last met the winger at the gate of the household before entering for private talks with the star.

News24 was also able to catch a glimpse of Nkosi, who appeared in healthy spirits without any visible physical harm.

Nkosi (26) started the 2019 World Cup semi-final against Wales and was considered a key part of the squad that won the tournament.

Later on Monday afternoon, the Bulls confirmed the news in a media release.

"The Blue Bulls Company and the Vodacom Bulls family are happy to confirm that contracted player, Sbu Nkosi has been found safe and sound.

After lengthy and extensive efforts from the Vodacom Bulls, in collaboration with SSG - who have gone beyond their commercial responsibility - at 14:02 pm on Monday, 05 December 2022, Nkosi was located.

Once it was established that Nkosi was safe, unharmed and in a position to speak, Chief Executive Edgar Rathbone went into Nkosi's home (with the permission of the player), spending alone time with him to understand how best the company can provide him with the support he needs and what that support is.

As the Vodacom Bulls family, we are thrilled that Nkosi is safe.

We wish to extend a vote of thanks to all the members of the public who shared information that contributed to our search. We wish to also express a word of thanks to the international community who also joined the call and efforts in searching for Nkosi.

At this present moment, we cannot give further comments on the matter but wish to advise members of the media that there will be a press conference held at Loftus Versfeld Stadium [ground floor media auditorium] on Tuesday, 06 December 2022, from 09:30 am."