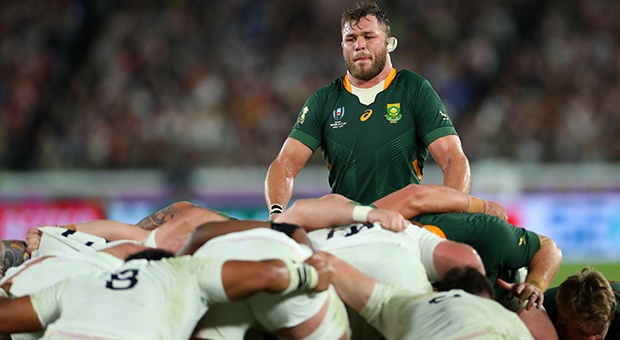 It remains an open question if the world champion Springboks will be in action in 2020 and whether there will be any Test rugby at all.

To keep fans interested, Sport24 has picked a World XV based on the form of Test players over the past year.

The team features six Springboks, five All Blacks, three Englishmen and one Fijian.

The best rugby player in the world has been trialled more at fullback than his regular flyhalf spot in recent times.

Barrett has played eight of his last nine Tests in the No 15 jumper and that's also where he's been utilised by the Blues in Super Rugby Aotearoa.

He's probably not the best tactical flyhalf and therefore one feels the fullback position may be where his future lies.

However, Barrett's abilities with ball in hand remain unmatched in the global game.

South Africa's pocket rocket has proved all doubters over his size wrong.

Standing a meagre 1.71m and 80kgs, Kolbe punches well above his weight and his speed, agility and all-round skill make him the world's best right wing at present.

After years of injury woes and disciplinary battles, Tuilagi has taken the Test scene by storm in recent years.

It always takes a man or two to bring him down and he's been a catalyst on attack for England.

Despite a nightmare World Cup final, Farrell has been a key playmaker for England in the Eddie Jones era, be it at flyhalf or inside centre.

Apart from the odd "no arms" tackle, Farrell is a potent defensive weapon in midfield and his kicking prowess - whether in the flyhalf or inside centre channel - is vital to his team's cause.

The 28-year-old was unbelievable at last year's World Cup in Japan. He may play Test rugby for a minnow nation, but the league convert has been a phenomenon since switching codes in 2017.

Radradra just pips South Africa's Makazole Mapimpi and Wales' Josh Adams, who was the top try-scorer at the World Cup.

It's a pity South Africa's Handre Pollard isn't playing rugby at the moment, because Mo'unga has been red-hot for the Crusaders in Super Rugby Aotearoa. He has forced Barrett to the fullback position for New Zealand's last five Tests and started 2020 where he left off in 2019.

Apart from being a reliable goal-kicker and shrewd tactical kicker, Mo'unga also possesses X-factor and is a player capable of sparking something out of nothing. The Crusaders' 26-15 win over the Blues last Saturday was a perfect case in point (READ more here).

The All Blacks star remains the scrumhalf with the crispest service in world rugby. Smith always keeps opposition defences busy with his sniping breaks around the fringes and is arguably the game's best organiser from the base of the scrum.

A hard-as-nails eighthman who should always be one of the first names on a coach's team-sheet. He was a key cog in South Africa's 2019 World Cup triumph and will go down as an all-time great.

The 34-year-old will captain this side.

Without doubt the best rugby player on the planet in 2019 and fully deserved his World Rugby Player of the Year accolade. Du Toit's versatility - he can also slot in at lock - makes him a certain starter in a World XV.

One of England's best players over the past year, the 22-year-old has the rugby world at his feet.

He was rightly nominated for last year's World Rugby Player of the Year award and will form a potent loose forward combination alongside the two Springbok greats.

A perfect combination of power and athleticism, the All Blacks veteran would form an impressive second row partnership with South Africa's Eben Etzebeth.

Arguably the most physical lock in world rugby, while Etzebeth's added mobility and skillset set him apart from contemporaries.

The powerful tighthead was one of the unsung heroes of last year's World Cup and played a big part in destroying the England scrum during the final in Yokohama. Just pips Ireland's Tadgh Furlong and England's Kyle Sinckler.

What a rise it's been for the burly Stormers No 2, whose recent heroics have kept Malcolm Marx out of the Springbok starting XV.

It was not so long ago that Marx was described as the best hooker in world rugby, however, Mbonambi has hardly set a foot wrong on the Test stage.

He is a strong ball-carrier and scrummager, is sound on defence and has markedly improved his lineout accuracy.

The All Blacks loosehead keeps South Africa's Steven Kitshoff out of the starting XV. Moody is a shrewd technical scrummager.

We live in a world where facts and fiction get blurred
In times of uncertainty you need journalism you can trust. For only R75 per month, you have access to a world of in-depth analyses, investigative journalism, top opinions and a range of features. Journalism strengthens democracy. Invest in the future today.
Subscribe to News24
Related Links
ANALYSIS | Burger, EW arrivals suggest season of switches beckons at Lions
Why much-maligned 'Toetie' is still worthy of SA franchise hotseat
British & Irish Lions' 2021 tour of South Africa to go ahead as scheduled
Next on Sport24
Warren Gatland disappointed in World Rugby for involving him in Erasmus video saga

Choose your newsletters
Voting Booth
Having lost the first Test against the British & Irish Lions, can the Springboks recover to win the series?
Please select an option Oops! Something went wrong, please try again later.
Yes, they will win the series 2-1. Go Bokke!
58% - 4196 votes
The Boks will win a Test, but will lose the series 2-1.
26% - 1867 votes
It's not looking good. A 3-0 whitewash is on the cards.
16% - 1170 votes
Previous Results
Tokyo Olympics
SA veteran star Wenda Nel leaves Tokyo with a smile: 'I gave it my all'