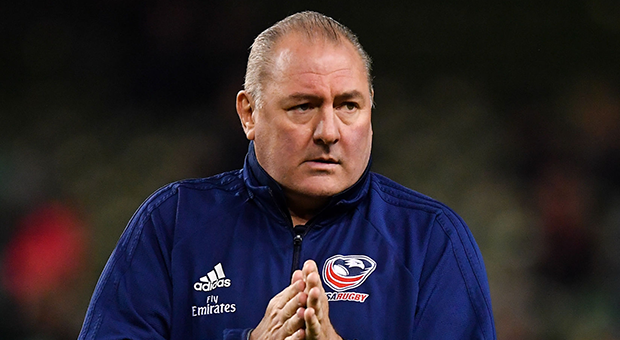 The Springboks could face the USA Eagles in a warm-up Test prior to their series against the British & Irish Lions later this year.

This revelation was made by USA head coach Gary Gold, who told the Rugby Pass website that plans were being made for the two nations face off as the Boks prepare for the likelihood of travelling to the UK to face the Lions.

"I approached the Springboks and they were in a similar position to us without fixtures and they said they could be looking for games," Gold said. "Hopefully, we will fulfil a need for the Springboks by getting some of the rustiness off and also get some game time ourselves.

"The plan is to play the Springboks either down there if the tour takes place in South Africa or if not, we could be coming to the UK.

"Pretty much we will play them anywhere and I'm very optimistic the tour will go ahead, but the pendulum is slightly going towards being in the UK because of the vaccination roll-out in the UK. It makes sense to go to a country that is more Covid-19 compliant."

It's looking increasingly likely that this year's Springboks v British & Irish Lions series will be moved from South Africa to the United Kingdom, while further reports over the weekend stating that both teams were considering basing themselves in Jersey, an island in the English channel between England and France.

South Africa and the USA have squared off four times in history, with the Springboks winning all four occasions. Their most recent encounter came at the 2015 Rugby World Cup when the Boks won 64-0 at the Olympic Stadium in London.

We live in a world where facts and fiction get blurred
In times of uncertainty you need journalism you can trust. For only R75 per month, you have access to a world of in-depth analyses, investigative journalism, top opinions and a range of features. Journalism strengthens democracy. Invest in the future today.
Subscribe to News24
Related Links
Former Ireland coach wants Boks in Six Nations: 'We're not going anywhere with Italy'
Dobson takes a back seat as Hlungwani takes Stormers coaching reins for Griquas clash
Women's 2021 Rugby World Cup set to be delayed due to Covid
Next on Sport24
Tendai 'Beast' Mtawarira the latest SA rugby personality to join Roc Nation