Wales to foil typical Springbok physical and aerial battle: ‘We can’t be one-dimensional’ 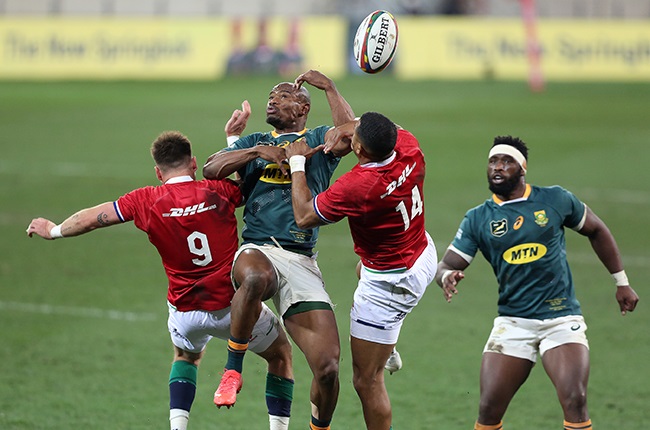 The Springboks struggled under the high ball in Saturday's first Test against the Lions. (Photo by EJ Langner/Gallo Images)

Wales want to bring a varied game into the three-match series against the Springboks to foil the hosts' typically physical and aerial game plan, according to assistant coach Stephen Jones.

The former Wales flyhalf, who coaches backs and attack in the current generation, said they could ill-afford to be “one-dimensional” and get sucked into SA’s way of operating.

READ | Bok star Pieter-Steph out of first Test against Wales

"I think there’s going to be a big aerial battle. We know that’s coming," Jones told media in Johannesburg.

"They’re very physical at the breakdown. We have to be incredibly smart in the way we play the game and have a balance to our and play in the right areas of the park.

"We can’t be one-dimensional in what we do. We have to have variety and options and that’s what we’re training to do."

The two nations clash at Loftus this Saturday in the first Test, which is expected to sell out by the end of the week.

It’s the first time the world champion Springboks will play in front of their home crowd since facing Argentina at the same ground prior to the 2019 World Cup.

Since the pandemic, they hosted the British & Irish Lions in an intense and hugely combustible, not forgetting controversial, series. And they hosted Los Pumas twice in the Rugby Championship.

Jones said the Welsh players who were part of that Lions series such as Alun Wyn Jones, Wyn Jones, Josh Adams and Dan Biggar brought that experience into the Welsh camp for this year’s tour.

"They were part of a very intense, physical Test series," Jones said.

"We’ve got three games to look forward to, so a lot of our boys experienced that last summer here, so we’ll be expecting the same.

"The big difference to them is the more open environment. Touring is a wonderful opportunity to see places.

"You grow the mind, enjoy the experience and the welcome you have and they’re certainly having that in this tour."

However, Jones said they would not necessarily follow their former head coach Warren Gatland’s blueprint that came to within the decider of winning in SA.

"We’ve got our own style of play and game plan.

"South Africa has a very good defensive system but you have to have variety in what you do."