Why the Springboks picked Wiese over Roos at No 8 for Wales opener: 'He's a project too' 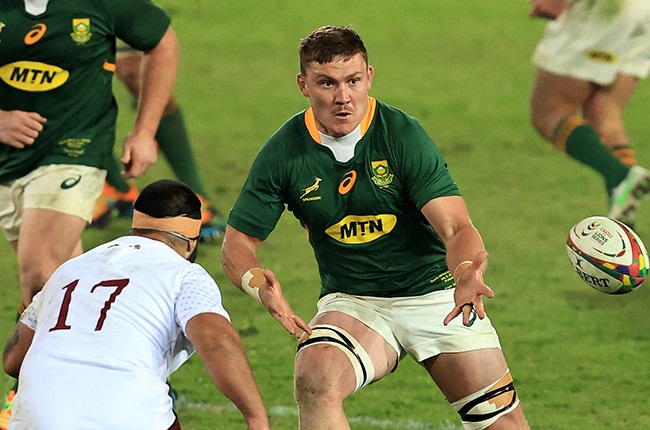 Springbok management, unlike some toddlers, aren't going to dump a "long-term project" in Jasper Wiese in favour of the shiny new toy that is the irrepressible Evan Roos.

National coach Jacques Nienaber, justifiably, on Tuesday highlighted the setup's need to keep the integrity of its selection policy intact, particularly in a series like the one against Wales, where there are expectations from various quarters that South Africa will experiment a bit more.

The 26-year-old Wiese, who'll be starting at eighthman in Saturday's first Test at Loftus, is a perfect illustration.

Despite Roos' understandable headline-grabbing heroics for the Stormers, the robust Leicester star has also elevated his game to new heights over the past six months.

By December 2021 - just over a year after joining the Tigers from the Cheetahs - the loose forward had racked up 5 yellow cards as well as a red, a blot on the copybook that eventually led to him receiving a two-match Premiership ban for picking up three of those yellows within the first few months of the 2021/22 campaign.

That led to a serious talk from the Leicester hierarchy.

Seventeen matches and a Man of the Match award in Leicester's title-clinching victory over Saracens later, Wiese is yet to be shown a card again.

"Jasper is a project, a long-term investment," said the Springbok coach.

"He's on 11 caps. When one thinks about planning for the World Cup next year, the ideal is to have a group of experienced players in your squad. It's only natural then to want to have Jasper gathering more caps.

"This is an opportunity for him to do so."

Nienaber also echoed the sentiments of Wiese's Leicester coaches in highlighting that the man from Upington has really knuckled down in improving in the areas he's been advised to.

"Jasper's been awesome. We do 'roadmaps' or performance analysis on players in our squad in detail. The players get reports once a month or whenever there's a gap to have a chat.

"He's been performing quite well for Leicester and, importantly, in the areas that we want him to perform in.

"He's not a finished product, but many of our players aren't yet. Many of them are long-term projects."

Where does that leave Roos?

"Wherever there's an opportunity, I'm pretty sure he'd take the opportunity with both hands. No matter where it is."

Nienaber also believes the 22-year-old would benefit from merely being a squad member.

"The things we want guys like Evan and co to achieve is not necessarily just play Test matches, but having a role and responsibility outside of the Tests, preparing the guys involved in the 23.

"There are a lot of things we would like to see them handle. That puts them in a good position going into the World Cup."