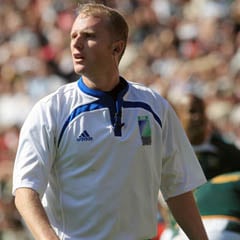 Cape Town - England's Wayne Barnes will referee the Boks' final end of year Test against France in Paris on Saturday.

Barnes will be the Boks' third northern hemisphere referee in as many matches on their tour after Ireland's Alain Rolland took control of their 24-15 win over Wales in Cardiff, while France's Jérôme Garcès was the man in the middle in their 28-0 victory over Scotland in Edinburgh last Sunday.

We live in a world where facts and fiction get blurred
In times of uncertainty you need journalism you can trust. For only R75 per month, you have access to a world of in-depth analyses, investigative journalism, top opinions and a range of features. Journalism strengthens democracy. Invest in the future today.
Subscribe to News24
Related Links
Boks eye 80-plus win ratio
Next on Sport24
Boks bask in British sunshine