Bakkies Botha proved his worth at the Stade de France... (AFP)

Well that wasn't a pretty win, but a win against France in France is always a good result. Morné Steyn proved how vital he is to South Africa's cause with his deadly goal-kicking and we did well in the scrums considering the torrid pitch they played on.

The lineouts were a shambles but the positives outweighed the negatives tonight. The Boks are taking most of their chances and they are clinical on attack .

A successful year and lots to look forward to for 2014!

Jacques Fourie's try should have been allowed. Then those elbow hits and tip tackling.....I just wonder what would have happened if a Springbok did that - Carl Davis

23:55 - Boks win a penalty as France go off-side. Lambie will line up an easy penalty to kill off the game!

23:54 - Lambie kicks it out to set an attacking lineout inside the French 22m area, three minutes left.

23:53 - Bok lineout mis-fires again! But Strauss makes amends by winning a penalty on the ground, right on the halfway line. 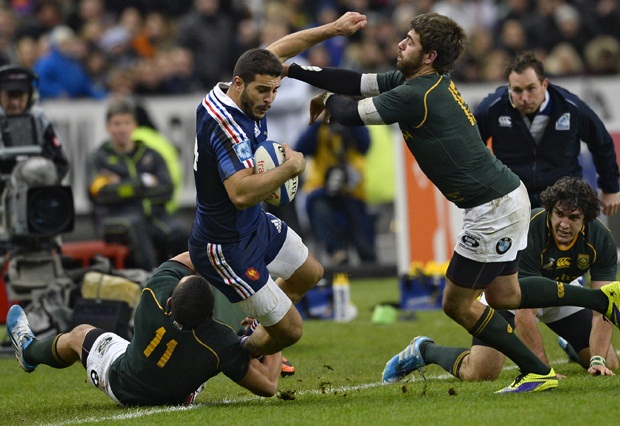 
23:52 - Frederic Michalak now also on at flyhalf for France, Tales is off.

Stupid by Flo. Second yellow in as many weeks. Needs to up discipline. Had an amazing test otherwise. Sad to take shine off it like that... - Brenden Nel


23:50 - TEST DEBUT for Lourens Adriaanse as he replaces Coenie Oosthuizen at prop.

23:48 - YELLOW CARD for Francois Louw for putting his hand in the face of France lock Pascal Pape. Silly from Louw! Parra lines up a penalty from in front... Jeepers, no Test goes by without a Springbok sin-binned!

23:47 - Lambie now replaces Steyn at flyhalf for the Boks.

23:46 - Huget counter-attacks and nearly scores but the ball bounces kindly for South Africa...

23:45 - Penalty for the Boks! Bismarck got a yellow card for doing exactly that against the All Blacks in Auckland earlier this year!

23:44 - However, referee Barnes wants to see a replay of a France player using a stiff arm on Jaque Fourie.

23:44 - They win a penalty after Habana goes off his feet over the ball. Nice to see Bakkies Botha's romantic side... BlitzBokke.com on Twitter


23:41 - Pieter-Steph du Toit wins his second Test cap, replaces Willem Alberts at the side of the scrum.

23:40 - YELLOW CARD for French reserve prop Thomas Domingo for a tip-tackle on Habana.

23:35 - Prop Gurthrö Steenkamp now on for The Beast as Boks attack close to the French 22m line...

Pienaar has his box kick charged down, someone get this lad off of the pitch - Rugga World 
23:29 - Boks get lucky when the French knock on as Pienaar's kick is charged down. Please take Pienaar off Heyneke! Commentator Bob Skinstad queries whether that was a lack of intelligence from the scrumhalf...

23:28 - Boks get a penalty just inside the French half when the hosts go off-side. Steyn will line up from about 45m out...

23:24 - France win a penalty just inside their own half when Le Roux is caught holding on. A nasty cut sees him being replaced by Patrick Lambie. Only a blood replacement though.

Critical mistake by Ruan. Critical. No excuse for that - Brenden Nel

23:20 - Oh no, France get a free-kick after Pienaar puts the ball in too quickly. Referee Barnes now makes it a long-arm penalty as it's the second time Pienaar has done this.

23:19 - French wing Huget may have got a hand to it first it appears. Yes, no try but the Boks get a five-metre attacking scrum. This time the TMO made the right call!

23:18 - Try? Francois Louw dives on the ball in the corner after Le Roux puts a little kick through. TMO in spotlight again.

23:17 - But Bakkies steals the lineout. Another chance to attack...

23:16 - A promising Bok backline move ends when Habana is tackled out just before the French 22m line.

23:13 - Relief for the Boks as they force a penalty inside their 22m area. Francois Louw again brilliant on the ground. That halts some French momentum.

23:12 - France give the Boks some of their own medicine and get a penalty when a driving maul is collapsed.  Tales kicks it deep into Bok territory.

The worst TMO call ever in the history of the game . This beautiful game is being ruined and destroyed - David van der Sandt

Shocking TMO call ... that was a Bok try - Mark Keohane


23:07 - What!? The TMO decides it was a knock on. Yet another blunder from a TMO. The standard of TMOs in Test rugby is simply diabolical! Boks robbed of a try there!

23:05 - The Boks get a tighthead and a break from De Villiers sees Jaque Fourie run through to score! The TMO must decide on a knock-on from Steyn though... looks like it went backwards from Steyn to his captain. The try should stand!

23:04 - But good French defence forces Ruan Pienaar to knock it on... He was caught in possession there.

23:03 - Immediate attacking chance for the Boks as Parra fails to get a long clearance... Bok lineout on the French 22m line.

23:01 - Welcome back for the second half. Lets hope that last try wasn't a momentum-changer... 
22:49 - But it was nevertheless a good half by South Africa and if they just remain calm, they should still win the game.

22:48 - That was silly from the Springboks for allowing the ball to just pop out the ruck after they caught the restart. The hosts now have their tails up!

22:46 - TRY awarded. Critical score just before the break. This could swing the game completely!

22:45 - This will be touch and go. Huget's knee looked to have touched the chalk, but did he score beforehand...?

22:43 - Oh no, France wing Yoann Huget dives over in the corner after South Africa fail to control the ball at a ruck. The TMO will decide if the ball emerged legally and if the try was scored. Morné Steyn has again showed how vital he is to South Africa's cause (AFP).

22:41 - A dominant driving maul and South Africa receive a penalty as France collapse it. Steyn lines up from about 15m from touch...

22:40 -  A brilliant penalty from Steyn takes SA all the way up to the French 22m line. Four minutes before half-time.

22:36 - Jean de Villiers almost intercepts the ball but drops it. He would have been under the posts, but at least halted the French momentum there...

What a joke of a call for the penalty there... - Brenden Nel

22:32 - Coenie Oosthuizen take a bow. He wins a penalty on the ground as France hold on too long. Good scrum just now by the Free Stater and now he gets the Boks out of their own 22m area...

22:31 - Etzebeth is definitely off for good as he is seen with a cast around his ankle...

22:29 - The Boks win a penalty at a scrum and Steyn will line up from close to the touchline. Brilliant scrum from SA and Bakkies blows a kiss to his opponents afterwards...lol.

22:26 - Willie le Roux breaks blindside but his pass to Habana goes astray. He should have held onto it a bit longer...!

22:25 - France steal the ball after the Boks attempt a driving maul. Tales clears well and gets the hosts outside their 22m area.

22:22 - Boks come out on top after an aerial ding-dong battle. Wille le Roux puts a clever kick in behind and France are forced to kick it out. SA get a lineout just inside the France 22m area... Time to attack.

Some huge hits by the Boks, wonderful to watch! - Jacques van der Westhuyzen

22:18 - Eben Etzebeth has been replaced by Bakkies Botha. Not sure why yet...

22:18 - So far France have the lion's share of the possession and territory but they've not created much...

22:15 - Jeepers, this surface is looking bad after every scrum. What's up with the pitches up north?

22:14 - Willie le Roux drops his first up-and-under but the Boks get out of jail as France knock it on in the middle of SA territory.

22:11 - A concerted period of attack sees France get a penalty after Francois Louw is penalised for slowing the ball down. Easy three points coming up...

Pitches in the NH are a disgrace!  - Craig Ray


22:08 - Trouble in the scum as it keeps collapsing...The pitch also seems to be a problem. Such a shame. Props can't get grip! Big scrum from the hosts though who now attack close to the 22m line.

22:07 - Oh no, free kick to France from the first scrum. They opt to take another scrum.

22:05 - France win the first lineout inside the SA half. They attack close to the 22m area but lose the ball as the Boks hold them up... First scrum coming up...

22:04 - Steyn CONVERTS from close to the touchline. France 0-7 SA after 2 minutes. That should knock the stuffing right out of the temperamental French. 
22:03 - TRY!!! JP Pietersen scores as he charges down a kick from France scrumhalf Morgan Parra. Morné Steyn failed to find touch but Pietersen was brilliant in following up... Brilliant opportunism.

21:56 - The Boks appear on the field fully clad in their tracksuits. All set for the national anthems now...

21:52 - The teams are about to appear on to the Stade de France pitch. It's a crisp, cold but clear evening in Paris. Last time South Africa played at this ground they won the Rugby World Cup final 15-6 against England in 2007. We have never beaten France at the Stade de France though.

Stade de France filling up. Boks warming up. Weather good. This is going to be awesome!! - Tinus le Roux on Twitter

"It's going to be tight, but I can't see us losing," says in-studio SuperSport commentator Naas Botha. 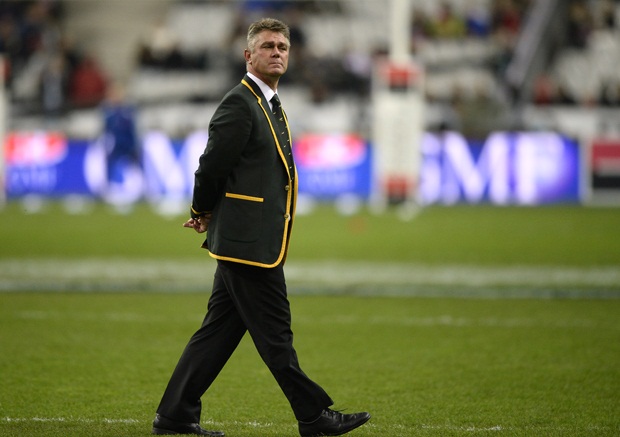 
21:26 - So what French team will pitch up tonight? It they play like they played against New Zealand a fortnight ago the Springboks could be in trouble. Despite losing 26-19, France dominated in the scrums and were unlucky not to get a penalty try late in the game when the All Blacks constantly collapsed the scrum close to their own tryline. Coenie Oosthuizen will get a real baptism of fire when he starts his first Test at tighthead. If he plays well and passes the test then the Boks will go a long way to winning I reckon. Also expect a big game from Bok loosies Francois Louw, Willem Alberts and Duane Vermeulen... The Springbok starting team boasts a total of 695 Test caps (447 in the backline and 248 in the forwards), while there are a further 201 caps worth of experience on the bench. The 447 caps in the backline equals the record that was set against Wales earlier this month.

Most tries – two by JP Pietersen against England and by Bryan Habana against Argentina.

Most conversions – four by Percy Montgomery

The Springboks will beat France by 7 points in Edinburgh, if local bookmakers are to be believed...

Today's referee is Wayne Barnes of England. This will be his ninth Test involving South Africa. The Springboks have won five and lost three. The last game was on November 10, 2012 on the end of year tour against Ireland, which the Springboks won 16-12.

Barnes will be assisted by Glen Jackson (New Zealand) and Leighton Hodges (Wales). Scotland's Iain Ramage is the TMO. 16:00 - Welcome to Sport24's LIVE interactive commentary on today's Test match between France and the Springboks from the Stade de France in Paris.


We live in a world where facts and fiction get blurred
In times of uncertainty you need journalism you can trust. For only R75 per month, you have access to a world of in-depth analyses, investigative journalism, top opinions and a range of features. Journalism strengthens democracy. Invest in the future today.
Subscribe to News24
Related Links
Steyn warns of French passion
Sport24 chats to Andre Joubert
Boks at a canter - Sowerby
Next on Sport24
Etzebeth cracks IRB nomination