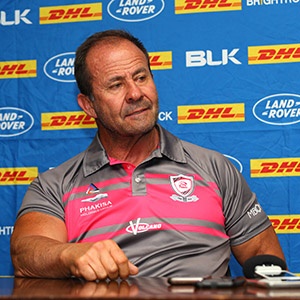 He readily acknowledges that Covid-19 is a curveball South African rugby couldn't foresee facing, but Jimmy Stonehouse, the Pumas' director of rugby, believes the local game's cash crunch can't be laid squarely at the pandemic's door.

In fact, it probably has more to do with unions simply being too spendthrift in the past.

They face an anxious wait until Thursday to see which of their players take advantage of the so-called escape clause, negotiated as part of SA Rugby's cost cutting plan, which aims to save between R750 million and R1 billion.

Allowing players to be granted an unconditional release from their current commitments if they have an overseas agreement in place, the provision is stoking fears that South Africa's player exodus will be exacerbated.

Yet Stonehouse argues the writing had been on the wall already by the time Rassie Erasmus, national director of rugby, announced last year's welcome but belated new local contracting model.

"I took us way too long to implement a salary cap for the local game," he told Sport24.

"To be brutally honest, that previous inaction has caused the sport almost irreparable harm."

According to the new system, unions are only allowed to award 45 senior contracts within a R60 million budget, which initially had some teams scrambling to prune their payrolls.

The Lions were the first to publicly announce cuts to their junior and fringe player ranks in late 2018, while former Bulls director of rugby Alan Zondagh had to deal with a massive 176 players on his books.

However, cutbacks were only one of the consequences.

"Five or so years ago, you had five to six guys contracted in one position at some of the bigger unions," said Stonehouse.

"I'm in no position to preach on that issue. Every union or franchise runs its affairs the way it deems fit. All I'm saying is you had a glut of players who were being paid good money to carry tackle bags. Some of their opportunities were very limited."

It would be natural to assume that teams like the Pumas and Griquas would be ideal havens, but, according to Stonehouse, it doesn't always factor in how well fringe players were being remunerated.

"It's one of the reasons why there are upwards of 350 South African players overseas. When two or three were looking for another team to join, we didn't really figure in their plans because the only way they could get more game-time and money was if they left South Africa," he said.

"In a nutshell, we and the players themselves had been priced out of the local market."

It's a dynamic that's now come back to bite the local game, especially given that Covid-19 has thrown South Africa's future in Super Rugby in doubt.

Is there enough star power and depth on show for local audiences to be satisfied with a SA-only alternative?

Can the much-maligned Currie Cup be revived?

"If we could've found a way a few years back to spread player resources more evenly, we would've had a local game that would still have been strong, even with an unfavourable exchange rate," said Stonehouse.

"More importantly, salary growth would've stayed within manageable levels and maybe we wouldn't have had to implement such dramatic cost savings. But it is what it is."

We live in a world where facts and fiction get blurred
In times of uncertainty you need journalism you can trust. For 14 free days, you can have access to a world of in-depth analyses, investigative journalism, top opinions and a range of features. Journalism strengthens democracy. Invest in the future today. Thereafter you will be billed R75 per month. You can cancel anytime and if you cancel within 14 days you won't be billed.
Subscribe to News24
Related Links
Stormers 'confident' of holding onto Du Toit, star Boks
Crusaders boosted with news of Whitelock cleared to play
Moneyball the Pumas way: 'If my players don't leave, we bought the wrong ones'
Next on Sport24
Pieter-Steph's bad luck shows how tough Boks' balance between stability and rejuvenation is