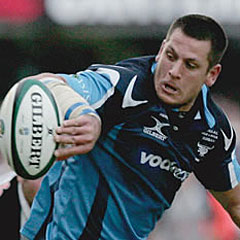 Pierre Spies (File)
Perth - The unbeaten Bulls got a huge fright from the winless Force before winning their Super 14 clash 28-15 at ME Bank Stadium in Perth on Saturday night.

Few gave the injury-ravaged Force any hope against the defending champions and competition trendsetters, but the home side showed great resolve defensively and led 15-10 going into the last 25 minutes.

The biggest upset of the season loomed on the back of teenager James O'Connor's accurate boot, with five penalties from as many attempts.

However, the Bulls steadied to make it six wins from as many matches this season, with Morne Steyn, who scored 18 points, making up for a couple of uncharacteristic penalty misses with a fine solo try to level the scores in the 57th minute and his subsequent conversion put the Bulls in front.

A Steyn penalty extended the margin to five points, before the Bulls capitalised on the Force being down to 14 men after Ryan Cross was sent off, with Zane Kirchner crossing for an easy try in the 68th minute to all but seal the result as they went 25-15 ahead.

The opening minutes of the game saw the confident Bulls camped inside the Force 22, determined to make an early statement as they searched for any defensive weaknesses.

In the ninth minute, Pierre Spies spun around a Force tackle to cross on the 10th phase as the Bulls went ahead 7-0.

It was a credit to the Force defence that the margin didn't blow out any more, as they repelled a steady stream of sustained Bulls attacks.

When the Force finally got their hands on the ball, they surprised the Bulls with their expansive play and with O'Connor in fine form with the boot, they launched a spirited and unexpected bid for victory.

When O'Connor kicked a penalty from a tight angle after the half-time hooter, the Force actually led 12-10 at the break.

That margin was extended to five points with another O'Connor penalty in the 49th minute, before the Bulls rallied as the Force tired.

Bulls captain Victor Matfield said his side struggled to adapt to the referee early, but was pleased to notch another away win.

"We gave away too many penalties in the first half," he said.

"In the second half we came out and the discipline was good.

"They defended well tonight, but you always take a win on the road."

Force skipper Nathan Sharpe was again frustrated his side had their chances but failed to take them.

"We want the result," he said.

"In the second half the Bulls' experience showed."

In next weekend's Round 8 action, the Bulls travel to Auckland to play the Blues while the Force host the Stormers in Perth.

Substitutes: 16. Bandise Maku, 17. Bees Roux, 18. Flip van der Merwe, 19. Derick Kuün, 20. Jacques-Louis Potgieter, 21. Jaco van der Westhuyzen, 22. Pedrie Wannenburg
We live in a world where facts and fiction get blurred
In times of uncertainty you need journalism you can trust. For only R75 per month, you have access to a world of in-depth analyses, investigative journalism, top opinions and a range of features. Journalism strengthens democracy. Invest in the future today.
Subscribe to News24
Related Links
Matfield keen on 'Tahs job?
All the latest Super 14 news
Latest Super 14 standings
Next on Sport24
SA build towards Super 15

Choose your newsletters
Voting Booth
After the opening weekend of URC action, what did you make of the South African struggles?
Please select an option Oops! Something went wrong, please try again later.
It exposed the quality of South African rugby...
38% - 2095 votes
There were positives to take
7% - 366 votes
We shouldn't read too much into one weekend
17% - 917 votes
It will take the SA sides time to adjust to the new competition
39% - 2177 votes
Previous Results
Showmax
The story of a legend: Sir Alex Ferguson