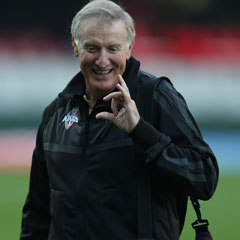 Port Elizabeth - The Southern Kings will be looking to send off director of rugby Alan Solomons with a win in their crunch Super Rugby promotion second leg against the Lions in Johannesburg on Saturday.

Solomons revealed on Tuesday he would be returning to the United Kingdom after the Super Rugby season to take up a coaching appointment in Edinburgh.

"My wife lives in the UK and has been commuting to SA for the last three years, so it has been very difficult and that is an important factor," Solomons said.

"I feel I have done what I can at the Kings. My contract is at an end and it is now time to move on.

"I would love to leave here in the knowledge that the Kings are still in Super Rugby because everyone has worked so hard in this region to put rugby on the map."

Flyhalf George Whitehead will step into the boots of Demetri Catrakilis for after the Southern Kings' first-choice pivot was ruled out of the game with a shoulder injury.

Although Catrakilis has been a key player for the Kings, Solomons said he was confident Whitehead would be a good replacement.

"You may remember, George played in the match against the Brumbies (in Canberra which was drawn) and knows how to execute the game plan, and I believe he will do a good job," said Solomons.

Due to Catrakilis' injury, however, the Kings have made some changes to the starting XV, with Scott van Breda replacing Marcello Sampson on the wing, and Waylon Murray slotting in at centre.

Shane Gates drops to the bench.

"Scott will be the number one goalkicker and I believe he has the bottle for the job," said Solomons.

"He is a local boy, having finished his schooling at Kingswood and has been at the academy since its inception."

The rest of the team is unchanged, while Wesley Dunlop has been selected on the bench to offer cover at flyhalf and as a goalkicker.

Solomons said the Kings, who lost the first leg match 26-19 on Saturday in Port Elizabeth, would be looking to cut their error-rate and to better use their opportunities.

"After looking at the video, our analysis was that we had plenty of opportunities but did not take them," he said.

"The players are positive we can turn that around and we are looking forward to the challenge.

"We cannot afford to give them anything and will be working on cutting our error-rate down."