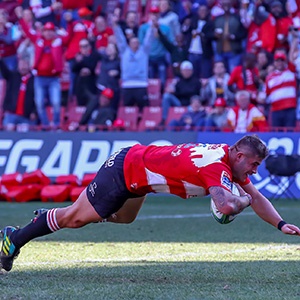 Malcolm Marx dives to score against the Jaguares... (Gallo Images)

The Lions and Crusaders booked home semi-final spots when they won their respective quarter-finals in convincing fashion.

The Crusaders now host the Hurricanes in the last four, while the Lions entertain the Waratahs at Ellis Park.

Both teams will be favoured to win - the Crusaders are unbeaten in their last 13 games and the Lions will take heart from their 29-0 walloping of the Waratahs in Sydney earlier in the season.

This could set up a first for the competition: the same two teams in successive finals.

Last year, the Crusaders beat a 14-man Lions 25-17 in the final in Johannesburg, but this year the final will be in Christchurch and the Lions will be heavy underdogs.

2. Don’t count out the Waratahs

Yes, the Lions will be the bookies’ favourites to reach a third Super Rugby final, but the Waratahs should not be written off.

The Sydneysiders have blown hot and cold throughout the season - the 40-31 home loss to the Brumbies earlier this month cost them a home semi-final - but they showed their fighting spirit this past weekend when they clawed their way back from 23-6 down to upset the Highlanders 30-23.

In 2018, the Waratahs also displayed their prowess against the trend-setting Kiwi sides: an example was a narrow 31-29 loss to the Crusaders in Christchurch in a game they had led 29-0.

The ‘Tahs will also be motivated to turn the tables after an indifferent performance against the Lions at home earlier in the season.

As is often the case in a Lions jersey, Elton Jantjies produced an assertive performance as the hosts beat the Jaguares 40-23 at Ellis Park.

Jantjies was named the official man-of-the-match but the award could just as well have gone to hooker Malcolm Marx.

It’s no wonder in-studio SuperSport pundit Nick Mallett called him the “best in the world”.

Apart from scoring a runaway try after an intercept, Marx was omnipresent in all areas: as a menace on the ground, with ball in hand and in the contact situations.

The Lions - and the Boks - will be worried after he was taken off in the 70th minute displaying some sort of discomfort.

There was no doubt in my mind that the Crusaders would crush the Sharks in their quarter-final in Christchurch.

A mammoth 27 log points separated the two sides beforehand and the gulf in class showed in the 40-10 scoreline.

As was evident throughout their 2018 campaign, the Sharks made far too many elementary errors to ever come close to the Crusaders.

The Sharks lost more matches (8) than they won (7) en route to the playoffs which smacks of a disturbing tournament format that rewards mediocrity.

I’ve discussed the unfairness of the conference structure in previous columns, but also feel in a 15-team competition the teams placed Nos 1 and 2 should automatically qualify for the semi-finals.

A 3 v 6 and 4-5 playoff structure could then determine the remaining two semi-finalists.

From a South African perspective, there’s no doubt that the Lions have been the trend-setters in Super Rugby in recent years.

They are favourites to reach a third straight final but questions need to be asked whether the under-achievements of the other three franchises are a good sign.

The Stormers and Bulls were nowhere in 2018, while the Sharks were nothing more than also-rans. These three franchises have traditionally been the strongest of the SA contingent in the professional era and their fall from grace should be of concern for SA Rugby's top brass.

Dropping the Cheetahs and Kings has clearly done nothing to improve the strength of the remaining SA Super Rugby franchises.

The outflux of players to Europe remains the biggest issue for the South African game and we cannot say our rugby is healthy when our best performing team - the Lions - win nine and lose seven matches in the regular season.

We live in a world where facts and fiction get blurred
In times of uncertainty you need journalism you can trust. For only R75 per month, you have access to a world of in-depth analyses, investigative journalism, top opinions and a range of features. Journalism strengthens democracy. Invest in the future today.
Subscribe to News24
Related Links
Blitzboks settle for bronze at RWC Sevens
Super Rugby semi-final date, times confirmed
Ex-WP hard man Clifford Etzebeth dies
Next on Sport24
Lions tinker with young-wise tonic in order to 'make a statement'