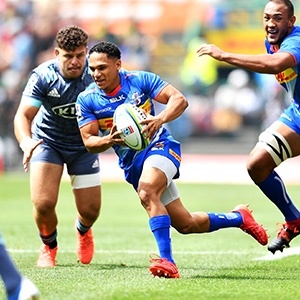 It was perhaps no surprise that Friday night's opener between the Sharks and Bulls at Kings Park was a scrappy encounter, won 23-15 by the hosts.

The humid conditions in Durban this time of the year is not conducive for an attractive style of rugby.

Seventeen handling errors in the first half alone tells a sorry tale and there was some irony in the fact that the second half was delayed by a floodlight failure at Kings Park.

Morne Steyn's sound kicking game kept the Bulls in touch and it was nice to see a moment of magic decide the contest late on when Sharks replacement scrumhalf Sanele Nohamba showed great pace to score.

The Stormers said before their clash against the Hurricanes that they would be targeting their New Zealand counterparts up front.

The Cape side's Springbok-laden pack - which included five World Cup winners in the starting XV - completely dominated the Hurricanes and laid the foundation for a 27-0 bonus-point win.

The visitors from Wellington were massacred at scrum time and lost the physical battle, with the final scoreline reflecting as much.

The Stormers' win came at a cost as they are set to lose Springbok captain Siya Kolisi for an extended period after he suffered a knee injury following a late hit from Hurricanes hooker Ricky Riccitelli.

The Stormers also lost Springbok hooker Bongi Mbonambi in the second half after he injured his hamstring at a fiercely contested breakdown.

It was disappointing to see the Hurricanes resort to several off the ball antics as it became more evident that they were being dominated.

Kirifi was named after former Springbok captain Morne du Plessis, who would not have been impressed by the young Kiwi's actions.

The Jose Amalfitani Stadium in Buenos Aires has become somewhat of a graveyard for the Lions in recent years and the men from Johannesburg started their season in the worst possible way with a 38-8 mauling at the hands of the Jaguares.

The Jaguares showed that they will again be title contenders in 2020 as they outmuscled their outclassed visitors, who also made several basic errors and missed kicks at goal.

Substitute flyhalf Domingo Miotti was the Jaguares' hero, contributing 18 points which included a try, five conversions and a penalty.

The Jaguares' win was their fifth straight over South African opposition.

Jantjies was his opportunistic self at Newlands and kept the Hurricanes busy all afternoon. The Springbok No 9's vigour was rewarded with a try and he'll again be one to watch again in 2020.

As mentioned earlier, Nohamba dazzled in a cameo performance at Kings Park and will be pushing Louis Schreuder hard for a place in the Sharks starting XV.

Steyn, who kept the Bulls in the game with his boot, showed that there is no substitute for experience.

We live in a world where facts and fiction get blurred
In times of uncertainty you need journalism you can trust. For 14 free days, you can have access to a world of in-depth analyses, investigative journalism, top opinions and a range of features. Journalism strengthens democracy. Invest in the future today. Thereafter you will be billed R75 per month. You can cancel anytime and if you cancel within 14 days you won't be billed.
Subscribe to News24
Related Links
Willemse 'scared' by France potential after England win
Zondagh set to quit as Bulls director of rugby
Galthie hails France's 'great' victory over England
Next on Sport24
Wallabies coach urges Australia to stay in Super Rugby