Change coming at Loftus, but it's the same old Jake 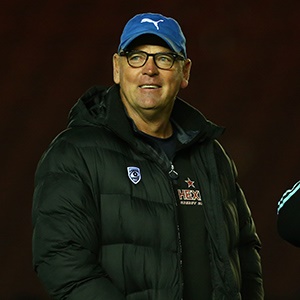 Jake White was just 40-years-old when he was appointed head coach of the Springboks all the way back in 2004.

While he came incredibly highly-rated having worked in the SA Rugby system as a video analyst and technical advisor under Nick Mallett before guiding the SA U-21 side to a World Cup win in 2002, White was still a relative youngster in the international game.

Even after he won the 2007 World Cup at the age of 43, his work experience was confined to South African borders. Since then, he has broadened his horizons significantly.

White coached in Australia (Brumbies), South Africa (Sharks), France (Montpellier) and in Japan (Toyota Verblitz). There was even a stint in the pacific islands as a technical advisor to the Tongan national side in 2014.

It is an extensive resume that has made White one of the most respected coaches in the world and given him a global perspective that will no doubt aid the Bulls as they look to the now 56-year-old to turn things around at Loftus Versfeld as their Director of Rugby.

The Bulls were once mighty, having bagged the Super Rugby title in 2007, 2009 and 2010. Back then, the recipe was not complicated. They had a pack of forwards that was more physically imposing than any other in the southern hemisphere while the boot of Morne Steyn kept them playing in the right areas of the pitch. It helped, of course, that they were blessed with some of the best players South African rugby has ever produced.

While the franchise remains in a healthy state financially, it has been in a steady state of decline since those days, results-wide. Along the way, the Bulls lost their identity and that was never seen more than after the 2015 World Cup when they looked to employ a free-flowing, attack at all costs game style that never quite fit and didn't bring the desired rewards.

With another exodus of key players coming in 2020 after the 2019 Rugby World Cup, things have been equally as tough for the Bulls under Pote Human this season where they had won just one of their six matches before the coronavirus brought global sport to a screeching halt.

White is yet to meet his players or coaching staff given the current state of the South African lockdown, but they can expect change. Some might be worried about their futures, but White will have to shake things up at Loftus if he is to achieve his desired results.

The aim, simply, is to return the Bulls to their place as one of the best franchises in the southern hemisphere. White is contracted until the 2023 World Cup and with the financial backing of Johan Rupert and Patrice Motsepe, he has both the time and muscle to implement the necessary change.

He is currently in talk with player agents, looking at potential signings with a particular focus on young talent.

"The Crusaders are obviously a powerhouse in Super Rugby and the Canterbury Mitre 10 Cup team is a powerhouse as well. That whole pipeline of the coaches and players is something we want to do here at the Bulls," White told Sport24 on Wednesday, revealing some of his plans for the future.

"We want to try and create a special DNA at the Bulls that doesn't allow us to make the mistakes that we've made in the past where we went from being one of the best teams to a team that is middle and bottom of the table."

White says the Bulls, by their own admission, have lost their way in recent years. While his pedigree and international experience has given him different perspectives, White still believes in South African rugby's traditional strengths and he is likely to bring the Bulls closer to the formula that made them one of the most successful sides of the 2000s.

"When you get older, you get wise enough to take what you've learnt from other countries and you try and use it as a strength," he said.

"One of the secrets of coaching is understanding where you're coaching. When you have South Africans like we produce and you have the style of players we have genetically, it's very strange for me that people want to move away from that.

"The reason Fiji play like Fiji is because they have that type of athlete. The reason Argentina maul and scrum is because that's how they play in their domestic game. The fundamentals of their game are based on the athletes that they have and in South Africa we have big, strong forwards. If you look at the locks we have playing around the world, our seventh or eighth choice locks are probably better than some countries' first choice locks. That's why we'll play that style and we don't mind set piece and physicality.

White's time in Japan taught him how to outthink opponents. His time in France, where he was exposed to a global pool of players, taught him to be cutthroat. There have been lessons from every job, but he remains the same old Jake when it comes to his views on the South African game.

"Yes, I have evolved, but I'm never going to move too far away from the fact that there's a recipe that works and the ingredients are all in South Africa. Some of them are in Pretoria. I'm definitely going to be sticking to what I know," he said.

With the blueprint quite clear, White must now go about assembling the personnel - players and coaches - who can best accommodate his philosophy. While some might see him as a 'conservative' coach, his Springbok World Cup winning side of 2007 did boast the tournament's top try scorer and that year's World Rugby Player of the Year in Bryan Habana. It isn't all just brawn.

The real shift, it seems, will come in the way White moves the pieces around.

"It's difficult over the phone to start talking to players. I think I'd like to do it face to face when I meet all of them, hopefully sooner rather than later," he said.

"It's difficult because you want to be humane about it. You're talking about people's livelihoods. They also understand that there will be changes. There need to be changes. You can't keep things the way they are and expect different results."

White does not know current head coach Pote Human personally, and the two have been unable to meet because of the current climate, but he is not unfamiliar with the coaching group.

"I've known a lot of them my whole life. Chris Rossouw (assistant coach) was in the Springbok team when I was coaching under Nick Mallet. Pine Pienaar (defence) was a junior coach at Free State when I was coaching as a youngster. I know Pote (Human) well enough to know who he is. I don't know him personally, but by all accounts, they are all very nice guys and passionate about the Bulls," White said.

"It's difficult. I'm just getting a feeling for what they've done, how they've done it, what's worked, what their feelings are in terms of what they think should change."

At this stage there is still no clear indication on when, or indeed if, rugby will return to South Africa this season. When it does, some sides, like the Super Rugby table-topping Sharks, will be looking to pick up where they left. Others, like the Bulls, will be starting over.

"It's a difficult one because you want to be fair to everybody," White added.

"Everyone who is in the game understands that there is no nice way of saying we are going to change things. Whenever there is change, some guys always get the brunt of it."