Cape Town - Harold Verster, managing director of the Cheetahs, insists the Bloemfontein-based franchise will not lose its Super Rugby status.

This comes after weekend reports indicated that the Cheetahs were believed to be one of three teams that could lose their Super Rugby status if the competition is reduced from 18 to 15 teams.

SANZAAR bosses met in London over the weekend to discuss the future of the tournament’s format, which has come under fire since it was expanded last year.

It is believed that the most popular proposal put forward was that three teams be scrapped from the tournament.

According to the Stuff.co.nz website, New Zealand's preference is for a 15-team model which retains the Sunwolves and the Jaguares, and involves South Africa dropping two sides.

Changes, however, can only be made with unanimous agreement from all SANZAAR partners.

In response to the proposed changes, Verster told Netwerk24 that he was not worried that the Cheetahs would lose their Super Rugby status.

According to Verster, the competition will be reduced from 18 to 16 teams from next year.

This would see only one South African team - likely to be the Southern Kings - along with an Australian team be axed from the competition.

Verster did not reveal where he got his information.

“All that I can say is that we’re safe. I keep my ear on the ground,” he told the Afrikaans website.

The Australian Rugby Union is thought to be open to dropping one team - which in all likelihood will be a toss-up between the Western Force and Melbourne Rebels.

SANZAAR CEO Andy Marinos said a decision regarding the future of the competition would be made in due course.

"Following two days of robust discussion there are a number of tournament considerations that now require further discussion and consultation. This includes final consultation within the national unions and discussion with key stakeholders that would allow the adoption of changes proposed by the strategic plan,” Marinos commented via a press statement.

"SANZAAR will make a formal statement on the future of the organisation, Super Rugby and the tournament format in the coming days once these further meetings have been concluded," added Marinos.

We live in a world where facts and fiction get blurred
In times of uncertainty you need journalism you can trust. For only R75 per month, you have access to a world of in-depth analyses, investigative journalism, top opinions and a range of features. Journalism strengthens democracy. Invest in the future today.
Subscribe to News24
Related Links
Seconds to ref Sharks v Kings derby
Bulls welcome back Strauss, De Jager
WRAP: Varsity Cup/Varsity Shield
Next on Sport24
Hello! Bulls make serious title statement in highveld storm 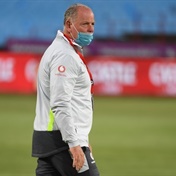