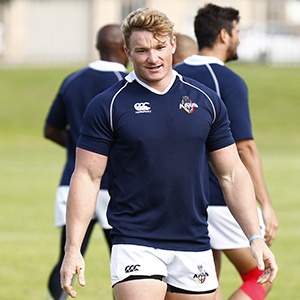 Cape Town - While the Kings' streak may be over after Saturday's 19-10 to the Brumbies in Port Elizabeth, they will have four players rewarded for their efforts this week when they take part in Allister Coetzee's Johannesburg-based Springbok training camp.

All four have been in superb form this season and instrumental to the visible improvement shown by the Kings in 2017, and coach Deon Davids believes that them being recognised speaks volumes about the state of rugby in the Eastern Cape.

"If you think about the players that were invited and how they took their opportunity … some of those players played first division rugby last year," Davids said, pointing to Cronje as a player in the SA rugby wilderness.

"It has just emphasised the importance of this franchise and how if players get an opportunity and if they’re put in a good environment and structure, they can excel.

"It’s a testimony to what we are about and what we try to achieve here. For me, it’s an excellent achievement for the whole team, the region and the individuals. It’s something that we mustn’t see out of context. We must understand that even with the challenges and circumstances, these guys excelled by grabbing their opportunity. They must be applauded for that."

The players who stand the best chance of being selected for June's series against France are probably Cronje and Cloete, given the shortages at flyhalf because of injury and the lack of specialists fetchers in the country.

The Kings, meanwhile, travel to Johannesburg this coming weekend for a daunting clash against the Lions.

For Davids, it is important to arrive at Ellis Park with a "good state of mind and a clear plan".

He says that the recent success of the side has meant that the opposition is paying more attention to them.

"If you start winning games, other teams start analysing you smarter and it gets tougher," he said.

"We’ve got to work hard to stay that one step ahead and that’s going to be our challenge going into the next few games. As a team we can only get better in terms of how we execute."

The Springbok camp began on Sunday and will run through until Tuesday. The first Test against France takes place in Pretoria on June 10.

We live in a world where facts and fiction get blurred
In times of uncertainty you need journalism you can trust. For only R75 per month, you have access to a world of in-depth analyses, investigative journalism, top opinions and a range of features. Journalism strengthens democracy. Invest in the future today.
Subscribe to News24
Related Links
2 Blitzboks crack nod for 2016/17 Dream Team
Mallett offers Etzebeth ‘anger’ advice
5 talking points: Super Rugby Week 13
Next on Sport24
Mongalo magic steadily taking root at the Bulls