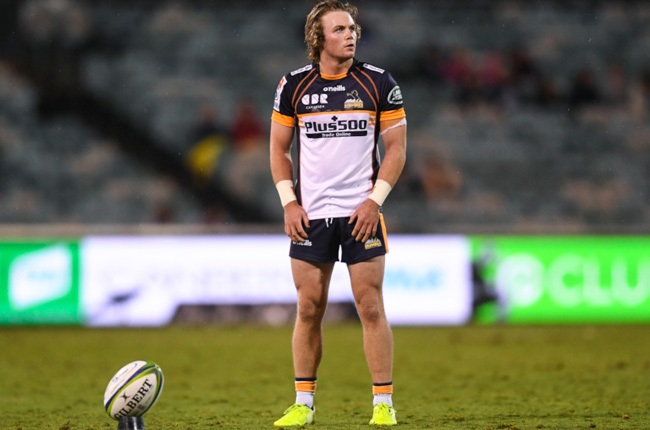 Ryan Lonergan nailed a sensational 55-metre penalty in extra-time as a dogged Brumbies battled past the Melbourne Rebels 27-24 to maintain their unbeaten start to the Super Rugby AU this season on Saturday.

It was an 18th victory from their last 19 at GIO Stadium in Canberra to put them top of the five-team ladder on 14 points after three games of the 10-round competition, five ahead of the Queensland Reds who have a game in hand.

But they did it the hard way against an impressive Rebels, whose skipper Matt To'omua booted eight from eight penalties.

They were locked at 24-24 on the full-time siren when the Brumbies won a penalty inside their own half, with Lonergan stepping up to attempt a kick at an angle and in a swirling breeze, mobbed by his teammates after it dipped over the bar.

"That's unreal, we've used our get out of jail card there," said Brumbies captain Nic White.

"But not surprised with Lonergan, he does that in training all the time and awesome to see him get one on the game and nudge it for us."

The Rebels, who narrowly lost to the Reds in their only other game so far, were physical and defended well to blunt the Brumbies' natural setpiece game, but it was still not enough.

"I thought we were probably in control of our game for most parts, but to be honest I think we were the victim of our own ill discipline. Just some silly uncharacteristic errors."

To'omua drilled a penalty in only the second minute to get the Rebels off to a flyer, only for the Brumbies' Noah Lolesio to match the feat before To'omua struck again.

The Rebels enjoyed the early possession and To'omua booted his third to put them 9-3 in front.

But the Brumbies stuck to their game plan which culminated in Len Ikitau dotting down after a beautifully weighted grubber kick from Lolesio.

They asserted control but suffered a blow when Alan Alaalatoa was red-carded on half-time for a dangerous tackle. Under new rules a sent off player can be replaced after 20 minutes.

To'omua converted the resulting penalty to give the Rebels a 12-10 lead at the break.

But in a massive play after the restart, the Brumbies were awarded a seven-point penalty try and the Rebels' James Hansen was sin-binned for collapsing the maul.

Two more To'omua penalties reclaimed the Rebels' lead before a Tom Banks try with nine minutes left swung the momentum back to the Brumbies.

Yet another To'omua penalty made it 24-24 before Lonergan's late heroics.

We live in a world where facts and fiction get blurred
In times of uncertainty you need journalism you can trust. For only R75 per month, you have access to a world of in-depth analyses, investigative journalism, top opinions and a range of features. Journalism strengthens democracy. Invest in the future today.
Subscribe to News24
Related Links
Head coach Sean Everitt extends contract at Sharks until 2024
PICTURE | Springbok captain Siya Kolisi 'honoured' to meet his Bafana Bafana heroes
'Ball-in-play': Local rugby's latest buzzword that's being misinterpreted
Next on Sport24
Western Force keep finals dream alive with thrilling win