Transformed Sharks picked on nothing but merit - Everitt 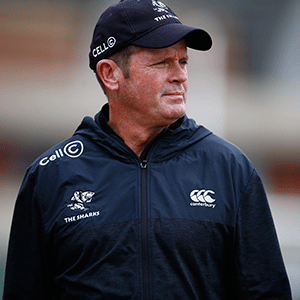 Cape Town - The Sharks, in securing a stunning 42-20 win over the Highlanders in Dunedin, fielded more players of colour than any of the South African franchises this past Super Rugby weekend.

While transformation targets exist at Springbok level in the form of the annual Eminent Persons Group (EPG) report, they do not exist at franchise level. The conversation remains an ongoing one, though, with SA Rugby president Mark Alexander having expressed concern as recently as last month over the lacking of representation in South Africa's four Super Rugby coaches, who are all white.

There were eight players of colour in the Sharks' starting XV on Friday - six of whom were black Africans.

Speaking from New Zealand on Tuesday, however, Sharks coach Sean Everitt insisted that the Sharks' more representative demographics were not the result of deliberate selection.

"It's got nothing to do with doing anything intentionally and that's from a development point of view as well," he said.

"The players that we have at the Sharks are selected purely on merit and I've never once had to look at the numbers to select the team.

"Whether I've been coaching at juniors or seniors, they've always been there and I believe that they're the best in their position and warrant their selection on merit."

Sharks captain Lukhanyo Am, meanwhile, said he was pleased with his side's flawless start to the 2020 season.

Friday's win over the Highlanders followed a 23-15 win over the Bulls in Durban in week one, and the Sharks have scored some superb tries along the way.

They next face the Hurricanes in Wellington on Saturday.

"The results are making it easier. In the camp it's really nice working with the boys and the vibe amongst us is really good," he said of his adjustment to the captaincy.

"I'm really happy with how we've performed as a group, but it's still early days. We're just trying to improve each week and hopefully we'll be consistent.

"We know the Hurricanes are a quality side and this is their first game at home. They will come out guns blazing."

We live in a world where facts and fiction get blurred
In times of uncertainty you need journalism you can trust. For only R75 per month, you have access to a world of in-depth analyses, investigative journalism, top opinions and a range of features. Journalism strengthens democracy. Invest in the future today.
Subscribe to News24
Related Links
Stormers out to trouble Lions scrum at Ellis Park
Kings boosted by timely Catrakilis return
Peyper to ref Lions v Stormers derby
Next on Sport24
Waratahs sign former Stormers centre Jamie Roberts