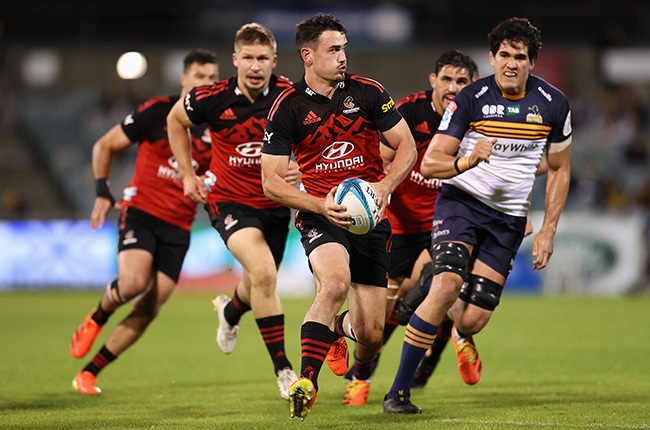 Will Jordan of the Crusaders. (Photo by Cameron Spencer/Getty Images)

A WRAP of the weekend's matches in Round 13 of Super Rugby Pacific:

Highlanders 61-10 Western Force - AS IT HAPPENED

The Western Force proved no match for the Highlanders at the Forsyth Barr Stadium, with the New Zealand outfit running out emphatic winners.

The contest was more or less over within the first 20 minutes, as the Highlanders scored four converted tries to open up a 23-point lead, while five more tries after the break ensured it was a miserable day at the office for the Force.

Brumbies 26-37 Crusaders - AS IT HAPPENED

The Brumbies fought all the way but the difference in class on the day was evident as the Crusaders ran out victors in their clash in Canberra.

The Australian side came into the game on the back of a three-game winning streak and was hoping to extend and move to the top of the Super Rugby standings.

However, the Crusaders - who had a slow start to the season - appear to be hitting their stride at just the right time and looked comfortable for most of the game despite the Brumbies always keeping it close.

Fijian Drua held on to beat Moana Pasifika in the battle of the Super Rugby Pacific newcomers at Sydney's CommBank stadium.

The Blues ran out comfortable winners against the Reds in Super Rugby Pacific at HBF Park to extend their lead at the top of the standings.

Waratahs 18-22 Hurricanes - AS IT HAPPENED

Despite not scoring a single point in the first half, the Hurricanes were able to bounce back in the second period to claim a narrow win over the Waratahs at Leichhardt Oval.

The Waratahs came into the match in superb form, having won four of their last five Super Rugby games and were looking to win three in a row for the first time since 2018.

The Hurricanes thrashed the Fijian Drua last time out, but were beaten by the Brumbies the week before and were looking to avoid back-to-back defeats to Australian opposition for the first time since 2014.

They trailed 15-0 at half-time before surging back in the second stanza.

We live in a world where facts and fiction get blurred
In times of uncertainty you need journalism you can trust. For 14 free days, you can have access to a world of in-depth analyses, investigative journalism, top opinions and a range of features. Journalism strengthens democracy. Invest in the future today. Thereafter you will be billed R75 per month. You can cancel anytime and if you cancel within 14 days you won't be billed.
Subscribe to News24
Next on Sport24
WATCH | Painted nails, karaoke and Spotify playlists! Taking post rugby match interviews to a new level