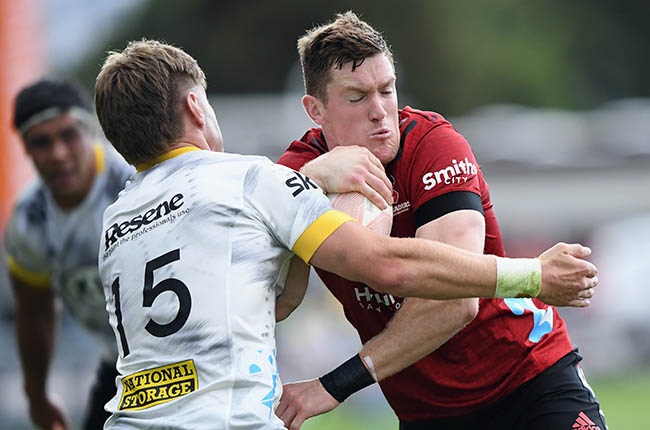 The defending champions Canterbury Crusaders crushed the Wellington Hurricanes with five tries in a 33-16 bonus-point victory in their Super Rugby Aotearoa clash in Christchurch on Sunday.

When the Crusaders locked the game up midway through the first half, Hurricanes captain Ardie Savea could only sit and watch from the sin-bin.

The 'Canes led 6-0 early from two Jordie Barrett penalties but the game turned when Savea was yellow carded for deliberately collapsing a maul.

While he cooled his heels on the sideline for 10 minutes the Crusaders chalked up 21 points with tries to Codie Taylor, Richie Mo'unga and Ethan Blackadder, all of them converted by Mo'unga.

On the cusp in half-time, a Scott Barrett try extended the lead to 26-6.

But Crusaders captain Barrett was not happy with the way his side finished the game as the Hurricanes narrowly had the better of the second half.

"We got a bit messy and the rain made things a little bit ugly. It wasn't a complete performance but we can be happy with the result," he said.

"The scrum was a bit ugly, a lot of movement, but our lineout was functioning pretty well."

Although the Hurricanes finished strongly, Savea admitted they were out of the contest when the Crusaders cashed in on his yellow card.

"It got them too far ahead for us to chase," Savea said

"Playing 14 men against the Crusaders is a tough challenge. They scored three tries while I was off. That's a credit to them and the quality side they are."

Two minutes before Barrett's late first-half try, the Hurricanes were in a prime position with a lineout five metres from the line only for Barrett to steal the throw and ignite a Crusaders' counter-attack.

The Hurricanes missed an earlier try-scoring chance when Jackson Garden-Bachop galloped 75 metres off an intercept, but when he slowed to look for support it allowed Crusaders wings Sevu Reeve and Leicester Fainga'anuku to catch him a metre short of the line.

The Crusaders' opening try in the second half was gifted to them when a Hurricanes' defensive lineout throw went too far and into the arms of an unmarked Taylor who strolled five metres to score.

Trailing by 27 points, the Hurricanes lifted their game in the final 25 minutes and were rewarded with two tries.

We live in a world where facts and fiction get blurred
In times of uncertainty you need journalism you can trust. For only R75 per month, you have access to a world of in-depth analyses, investigative journalism, top opinions and a range of features. Journalism strengthens democracy. Invest in the future today.
Subscribe to News24
Related Links
Saracens suffer shock defeat in second division debut
Ryan Lonergan nails 55-metre match-winning kick for Brumbies
Head coach Sean Everitt extends contract at Sharks until 2024
Next on Sport24
Sharpshooter McKenzie kicks Chiefs to thrilling golden point win over Highlanders