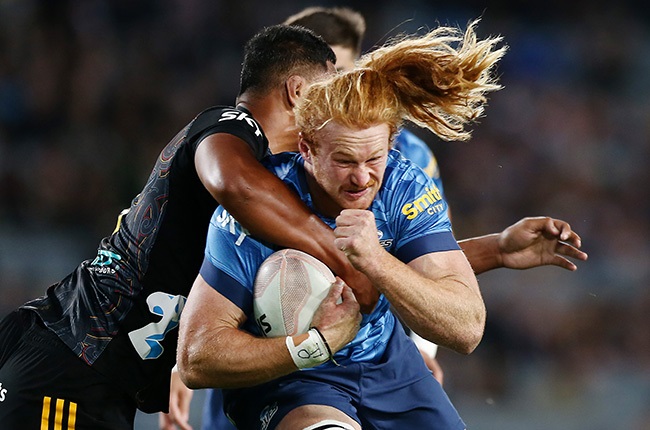 Tom Robinson of the Blues (Getty)

The Blues made hard work of what was expected to be an easy romp against a second-tier Chiefs in Auckland on Saturday, eventually winning 39-19 to wrap up the regular season of Super Rugby Aotearoa.

The Chiefs rested 21 of the match-day 23 who confirmed their berth in the finals when they beat the Wellington Hurricanes last week.

But while down on firepower they were always threatening to snatch the game.

The score was locked at 19-19 before the Blues' late rally produced 20 points in the last 15 minutes to give them a flattering scoreline.

The Blues, out of contention to make the finals, were looking to sharpen up before the trans-Tasman competition with Australian Super sides starts in two weeks.

But it was the novice Chiefs who had better continuity on attack, with Pita Gus Sowakula, Bailyn Sullivan and Te Toiroa Tahuriorangi all finding holes around the Blues ruck.

Only poor finishing cost them at least three tries.

The bonus point victory meant the Blues finished equal with the Chiefs on 20 points but the Chiefs qualified to play the Canterbury Crusaders in next week's final by virtue of winning more games.

Blues captain Tom Robinson was happy with the win but admitted it was not the performance they wanted.

"Sometimes you win ugly," he said, adding the six-tries-to-one outcome was a good preparation for the upcoming competition.

"We spoke about how it might not come until the 70th or 80th minute and that's what happened. But a win like that can spark the team."

Chiefs captain Sean Wainui said he could not fault the effort of his young and inexperienced side.

"I'm gutted about the loss. We left a couple of tries out there early on, but I can't be proud enough of our boys. We had six debuts today."

Bryn Gatland, whose boot contributed most of the Chiefs points, had the visitors on the board first with an early penalty.

The Blues struck back with converted tries to Kurt Eklund and Adrian Choat while Gatland kicked two more penalties for the Aucklanders to turn 14-9 ahead.

A fourth Gatland penalty and a converted try to Shaun Stephenson for the Chiefs along with a try to Zarn Sullivan for the Blues levelled the score at 19-19.

But when the Blues unloaded their bench they finished off the Chiefs with two tries to AJ Lam, another to Hoskins Sotutu while Otere Black added a penalty and conversion.

We live in a world where facts and fiction get blurred
In times of uncertainty you need journalism you can trust. For only R75 per month, you have access to a world of in-depth analyses, investigative journalism, top opinions and a range of features. Journalism strengthens democracy. Invest in the future today.
Subscribe to News24
Next on Sport24
Hurricanes finish Super Rugby Aotearoa season on a high