Oz out to end 10-year drought 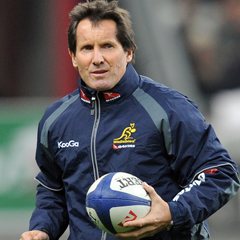 Brisbane - Australia head into Saturday's Tri-Nations decider bidding to end a 10-year title drought in the tournament, while opponents New Zealand are looking to return to winning ways ahead of next month's Rugby World Cup.

The Wallabies have not lifted the southern hemisphere crown since John Eales's team won in 2001, while the All Blacks have dominated the Australians this decade and are chasing their 11th Tri-Nations crown.

The fierce rivals enter the final game in Brisbane tied on nine points, but the All Blacks have the better points differential and enjoyed a commanding 30-14 victory in Auckland three weeks ago.

The All Blacks have rolled out their heavy artillery with 11 first-choice stars returning for the decider, while in contrast the Wallabies' preparation has been disrupted by disciplinary problems.

Wing James O'Connor is ineligible after receiving a one-game ban for missing last week's Wallaby World Cup squad announcement and there was a fuss over a 10-month-old tour incident between O'Connor, Quade Cooper and Kurtley Beale.

The Australian Rugby Union said it found no grounds to take action against three young players reportedly involved in a fight in the days before the side scored a record 59-16 win over France in Paris last November.

It was an unwelcome distraction for coach Robbie Deans as he looks to mastermind what would be only Australia's second win in their last 13 encounters with the All Blacks.

The Wallabies finally downed the All Blacks 26-24 in Hong Kong last November, but it is more than three years since Australia last beat New Zealand at home and Graham Henry's team has yet to lose in three Tests at Brisbane's Suncorp Stadium.

Yet there is also pressure on the All Blacks. After their second-string side fell 18-5 to the Springboks in Port Elizabeth last weekend, losing in Brisbane would mean they go into the World Cup on home soil off the back of two defeats.

That would prompt another round of conjecture about their ability to win the World Cup after 24 years of tournament collapses which have earned them the tag of chokers on the big stage.

Coach Henry is taking nothing for granted and has named his strongest XV to tackle the Wallabies.

"This is a tournament-defining match for the team. The winner wins the Tri-Nations, it’s as simple as that," Henry said.

"Australia are a dangerous team to play and they will be looking to bounce back from the loss against us in Auckland, so we will have to play at our very best. It’s going to be a massive Test match."

The Wallabies put themselves in contention for this year's Tri-Nations with a spirited 14-9 win in Durban a fortnight ago.

"The All Blacks are not the bench mark in world rugby without good reason," Deans said.

"They give you nothing and pounce on any opportunities that you give them.

"To beat them, we will need to be disciplined, accurate, composed but, most of all, deserving."

Centre Anthony Fainga’a and forwards Radike Samo and Dan Vickerman get their chance for the Wallabies ahead of the World Cup.

Fainga’a comes into a backline reshuffle for the suspended O'Connor while Fijian-born number eight Samo, 35, gets his first Test start since 2004 and Vickerman replaces lock Nathan Sharpe.

"Dan offered go forward for us in the second half in Auckland, and has come on in his overall fitness," Deans said.

"Anthony and Radike both made their presence felt in Durban and we felt their previous contributions warranted a further opportunity."

Richie McCaw will captain the All Blacks in his 98th Test, the same number as fullback Mils Muliaina, while goalkicking ace Daniel Carter is lining up for his 82nd international.

We live in a world where facts and fiction get blurred
In times of uncertainty you need journalism you can trust. For only R75 per month, you have access to a world of in-depth analyses, investigative journalism, top opinions and a range of features. Journalism strengthens democracy. Invest in the future today.
Subscribe to News24
Related Links
All Blacks back in full force
Genia expected to be fit
School's 'out' for Wallabies
Next on Sport24
All Blacks back in full force