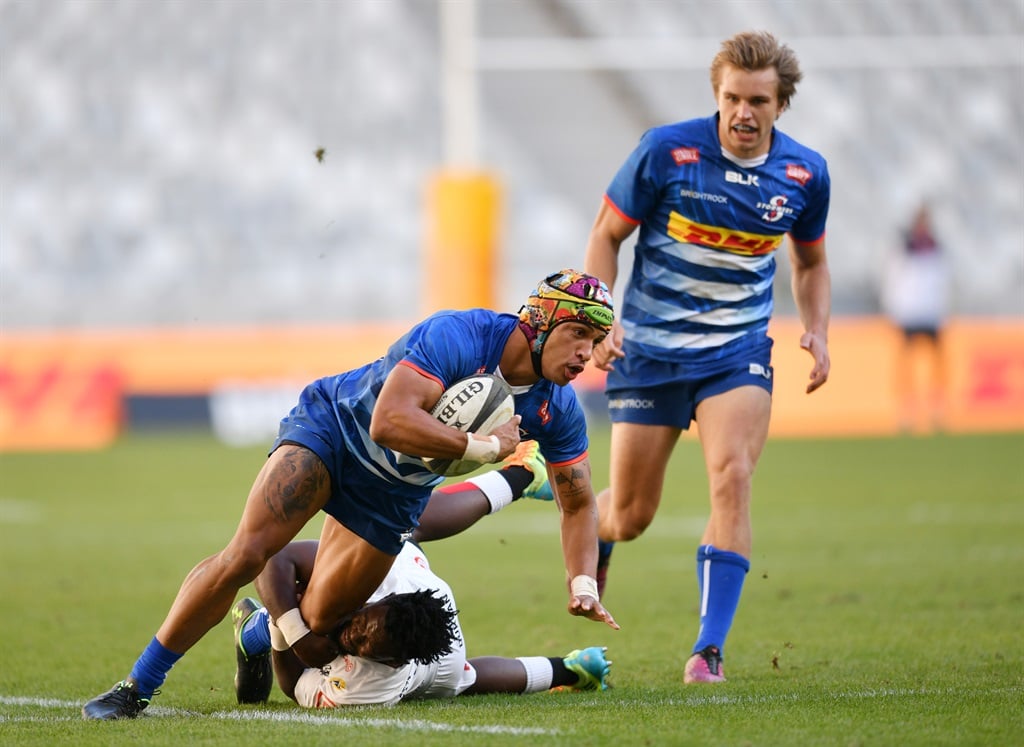 Edwill van der Merwe in the colours of the Stormers during a URC match. (Photo by Thinus Maritz/Gallo Images)

Stormers centre Dan du Plessis was effusive when speaking about former team-mate Edwill van der Merwe, who moved to the Lions in November, saying he isn't far from a Springbok call-up.

The Stormers play the Lions at the Cape Town Stadium on Saturday in a stopgap measure following the postponement of games against Zebre, Munster, Cardiff and Scarlets for the South African teams in Rounds 6 and 7.

The postponement was due to the presence of the Omicron Covid-19 variant in the country, leading to teams rushing out of South Africa.

Du Plessis told a press conference on Tuesday that the way Van der Merwe has been playing, he is due higher honours in no time.

The speedster began training with his new club in November after his United Rugby Championship commitments with the Stormers in the first few rounds of the competition.

The last time the two sides played in May, Van der Merwe was crucial in the Stromers' narrow 39-37 win at Ellis Park.

"Obviously when you prepare for any team, you look for strengths and weaknesses and places you can target. We all know Edwill's ability and how well he did when he was here, he can't be far from a Bok squad, the way he’s been playing," Du Plessis said. Van der Merwe was named in the Lions team originally scheduled to take on Cardiff on Sunday, and may well be in line to face his former team-mates when the teams are named later this week.

He scored five tries in nine games for the Stormers in 2021, before his move, but while Du Plessis was full of praise for the elusive winger, he said the focus, though, remains on them.

"I've often said the focus is always on ourselves and it will be nice to come up against him again and see him on the opposite side of the field," said Du Plessis.

"It was a great opportunity for him [to move] and we were sad to lose him," said Stormers backline and attack coach Dawie Snyman.

"He's a great player and contributed a lot to us... when we were training as well, he was always competitive, so I don't think anything is going to change there," he added.

We live in a world where facts and fiction get blurred
In times of uncertainty you need journalism you can trust. For only R75 per month, you have access to a world of in-depth analyses, investigative journalism, top opinions and a range of features. Journalism strengthens democracy. Invest in the future today.
Subscribe to News24
Next on Sport24
Lions wary of losing talismanic Tshituka for extended period: 'His work ethic is special'