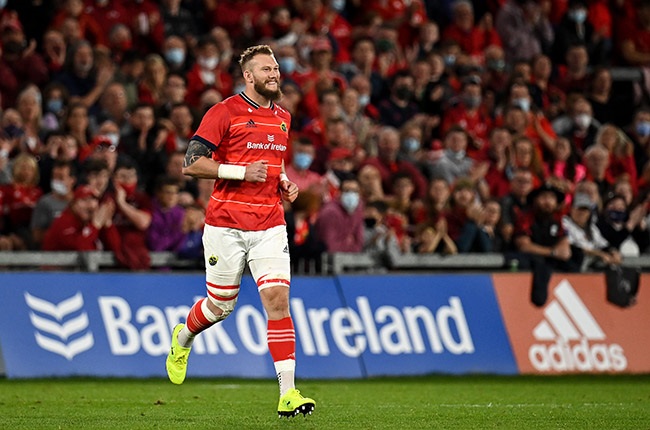 The return to the playing field of Springbok lock RG Snyman may have been a footnote in Saturday’s 42-17 United Rugby Championship opening win for Munster over the Sharks, but for more reasons than one it was massive.

Snyman last appeared for his Irish club on his debut, where he lasted only seven minutes before coming down hard from a lineout and tearing knee ligaments that kept him out for longer than expected.

He was in a race against time to get fit for the Springboks’ Test series against the British and Irish Lions, but a freak firepit incident then saw him and fellow Bok Damian de Allende sustain serious burns - so much so that he was forced to leave the Bok camp before the series for a skin graft.

And then, when the Boks were due to head to Australia for the Rugby Championship, a family bereavement stopped Snyman from boarding the plane to join his Springboks.

So, it is understandable that there were more than just a few smiles when the Springbok World Cup winner finally made it onto the field on Saturday, giving a glimpse of what Munster fans have been hoping to see and what the Boks have been missing.

Snyman is no ordinary rugby player.

His athleticism and size make him an integral part of the Bok forward pack and the hope is that he can get some good game time for Munster before perhaps joining the Springboks for their November tour.

On Saturday, Munster and former Springbok assistant coach Johann van Graan sang Snyman's praises, saying he hoped Snyman’s return would spark something special in his side.

But Van Graan poured cold water on thoughts Snyman may burst back into action in the starting line-up, and indicated the road back to a start may be a bit longer for the big lock.

“When we recruited RG we saw something in him that can make a big difference to our team and specifically to our group,” Van Graan said

“When you look at players you don’t look only at what they can do on the pitch but also off the pitch. In my view he’s a phenomenal rugby player and an incredible human being so we missed those two things last season, the fact that we couldn’t have him.

“I want to stress again that he’s come through such a lot both on and off the pitch that I’m certainly not going to rush him back into the starting team. We’ll take our time and when he’s ready for that I will pick him.

“The one thing I didn’t mention is that kick-off he took, his movement on the floor, so I certainly rate him very highly, that’s why I signed him and he’s a massive, massive part of our group going forward.”

Van Graan said Snyman was “excited” at making it through the game and was chomping at the bit to play.

“He was very excited. We said that we won’t put him on the pitch if he’s not ready. He’ll get a lot fitter but his knees are good and he came on and made that poach straight away and in that last try, the way that he got that ball away on the touchline, that offload shows what he can do.

“He’s got a long way to go in terms of building up minutes and we’ll look after him carefully but in terms of him being excited to play, inside (the dressing room) he said ‘coach, I got past seven minutes’ which was brilliant.”

While short-term the Boks may keep an eye on him, both Munster and the Boks want Snyman to be fit long-term. And that in itself would be the prize for both the Irish club and the World Champions.
We live in a world where facts and fiction get blurred
In times of uncertainty you need journalism you can trust. For only R75 per month, you have access to a world of in-depth analyses, investigative journalism, top opinions and a range of features. Journalism strengthens democracy. Invest in the future today.
Subscribe to News24
Next on Sport24
Lions prop makes move to Scotland