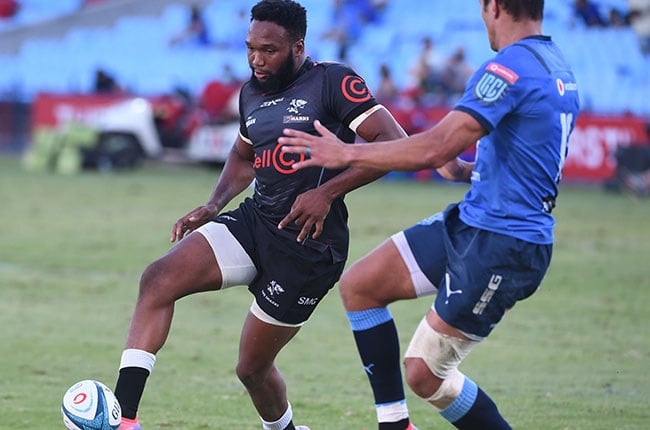 Lukhanyo Am. (Photo by Lee Warren/Gallo Images)
The Sharks exorcised some Loftus demons after beating the Bulls 29-22 at home in an gripping but discipline bereft United Rugby Championship game on Saturday night.

The salubrious presence of expectant fans spotted sparsely around the Loftus west stand gave the match the real feel of importance it warranted.

Even if it was a trickle, their presence, flags waving and selfies flashing, warmed up the place - the sound of Nkalakatha by Mandoza blaring out of the stadium speakers to appreciative ears.

The thrilling encounter was the least they deserved for gracing the famous Pretoria ground with their longed-for presence.

Both teams played the last 19 minutes with 14 men, but the Bulls had to toil the longest with a man disadvantage after Morne Steyn was red-carded for a high, late tackle on Lukhanyo Am that the officials deemed dangerous and without mitigation for a lighter sentence 10 minutes in.

Barely a minute after the sending off, Sharks flank Henco Venter drilled through wing Madosh Tambwe, who filled in the No 10 channel where Steyn would have been, to score the first try.

The Sharks had looked like they might take the points before Steyn was ejected, but they went for the touchline as soon as they got a man advantage.

For the following 15 or so minutes, the Bulls somehow summoned up some impetus and camped inside the Sharks 22m area but left without recompense.

They spurned kickable penalties for lineout drives and tap-and-goes, which were both unsuccessful.

It was interesting to see how the flyhalf's dismissal affected even the Bulls scrum, an area where they had the ascendancy in the opening exchanges.

Soon after weathering the Bulls storm, hooker Bongi Mbonambi peeled away from a maul drive to score the Sharks second try.

But the Bulls finally got some reward when wing Cornal Hendricks finished well in the corner after the Sharks were also down to 14 men following Venter's yellow card for repeated Sharks infringements.

As the Bulls were lulled into thinking they'd go into the break only 12-5 down, Am scored the most incredible try from the resultant restart after Hendricks’ score.

The Springbok centre caught the ball millimetres from the touchline, outwitting the Bulls defence before toeing the ball to himself and finishing off unmarked.

After the Bulls picked up their momentum in the second half, captain Marcell Coetzee corkscrewed his way over the try line to bring the hosts to within seven points.

But Sharks scrumhalf Grant Williams found Makazole Mapimpi with a superb long-range pass for a score that again doused the Bulls momentum.

Williams turned the villain when he was also sent off for a dangerous tackle on replacement flyhalf Chris Smith after making contact head-first with the Bulls pivot.

The second red card of the came produced a thrilling if error-riddled finish to the game.

Substitute prop Simphiwe Matanzima scored a try five minutes from time, and Tambwe added another two minutes from the final hooter that brought the Bulls close.

If only they had a kicker, as the two missed David Kriel conversations proved the difference in the end.