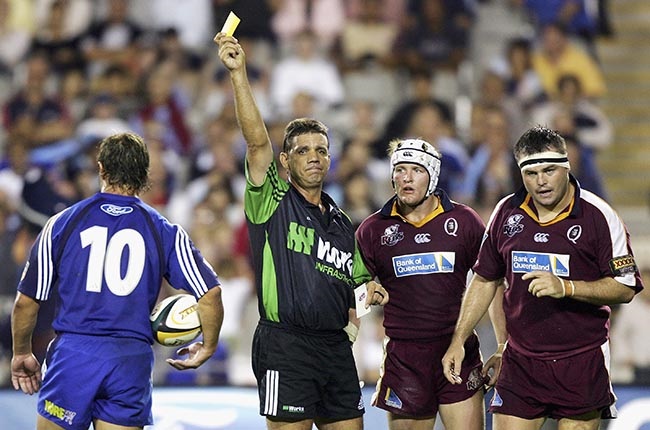 Tappe Henning back in 2005. (Photo by Dean Treml/Getty Images)

South African referee, Tappe Henning was on Wednesday named as the Head of Match Officials for the United Rugby Championship (URC).

He succeeds Greg Garner, who occupied the position since 2017 according to the URC website.

Henning's duties include match official selection for URC fixtures, identifying new refereeing talent and leading the review and analysis process for officials in the competition.

On his appointment, Henning says he is keen to encourage positive play in the competition by fostering a collaborative approach between officials and coaches.

"I am extremely excited about the cross-hemisphere competition of the United Rugby Championship and the goal of bringing together north and south to create a collaborative approach which will encourage positive play," said Henning.

"With so many differing styles of play in the URC it will require a big effort from myself, our match officials, the clubs and their coaches to mutually agree on our core principals so everyone knows what to expect. With a partnership based on mutual respect towards the different rugby cultures and playing styles – coaches and match officials can work towards a product that will be unique to the rugby world.”

URC Tournament Director, David Jordan, was pleased to have Henning in this pivotal role.

"After a very thorough process we very pleased to have appointed Tappe Henning as our Head of Match Officials," he said.

"Tappe’s CV provides him with a balance of experience that is very unique and well catered to the United Rugby Championship, given that he has refereed at the highest levels in South Africa and in Super Rugby and due to his eight years with Scottish Rugby, he has a full knowledge of our landscape in the north and how our match official process functions.

"This is a very challenging role and we know Tappe is very eager to build upon the foundations laid in place by his predecessors Ed Morrison and, most recently, Greg Garner," Jordan added.

Henning's most recent role was as the Scottish Rugby Union's Referee Commissioner, a post he occupied for eight years.

He also referred in 14 Test matches and at the age of 34 he became the youngest referee of a Currie Cup Final in 1995 and went on to whistle the 1997 Super Rugby Final between the Blues and the Brumbies.

We live in a world where facts and fiction get blurred
In times of uncertainty you need journalism you can trust. For only R75 per month, you have access to a world of in-depth analyses, investigative journalism, top opinions and a range of features. Journalism strengthens democracy. Invest in the future today.
Subscribe to News24
Next on Sport24
Stormers still without Bok prop Malherbe ahead of Bulls trip