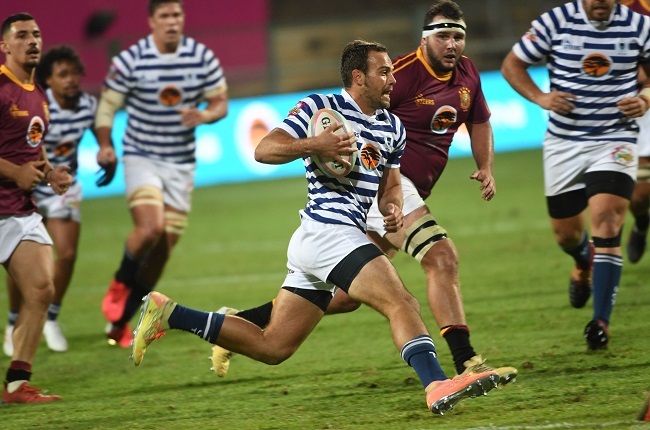 Evardi Boshoff in action for UCT against Maties. (Photo by Lee Warren/Gallo Images)

South Africa’s highly anticipated intervarsity competition is gearing up for a 15th season and for the first time since 2020 will be staged at university grounds around the country.

After a difficult 2021 season, hosted at Tuks in a bio-bubble environment, the prestigious tournament will return with a limited number of fans allowed into the respective stadiums.

“The South African sporting community has endured a tough time of it over the past two years, so it’s great to see the Varsity Cup returning to the participating universities across the nation,’ said Xhanti-Lomzi Nesi, the Varsity Cup Tournament Manager. “We’re particularly excited to have the fans back in the stadiums.

“We’re expecting a fiercely competitive tournament. Two teams will be relegated to the Varsity Shield at the end of the 2022 season, so there is certainly a lot on the line.

“The Varsity Cup has always prioritised innovation, pushing the boundaries and changing the lives of those who form part of the community.

“This is the 15th season of this amazing tournament, and fans can expect to be entertained on and off the field over the next few months,” Nesi continued.

Rugby fans will be romantically reunited with The Varsity Cup when it kicks off on 14 February, Valentine’s Day, when defending champions UP-Tuks face five-time winners Maties.

All 10 teams will compete over the course of nine rounds, with no byes. After the ‘league phase’ of the tournament, the top four sides on the log will advance to the semi-finals.

The Varsity Shield’s first whistle will blow on 4 March when Rhodes take on title-holders CPUT at the Rhodes Great Field.

The seven-team Shield competition will host its matches at a single venue each matchday from Rounds 1-6, with the home teams hosting games in Round 7.

At the conclusion of the round-robin phase, the top four outfits on the log will qualify for the semi-finals.

In this year’s season, the intervarsity tournament will trial a new variation of the current 50/22 law - a trial that has already been approved by World Rugby.

A team in possession that kicks the ball directly into touch, from inside their own half, will receive a free kick 15m in from touch. The kicking team may not opt for a scrum or lineout, but rather a tap kick. If the team scores from that position, the try value will be seven points.

Furthermore, there is no requirement for a set phase inside a team’s own half. A team may carry the ball back and kick it indirectly into touch inside the opposition's 22. If a team scores from the tap, it will receive an additional two points for that try (point-of-origin try), according to the Varsity Cup.

All of the other rules and regulations will remain the same, with Varsity Cup teams still able to score a seven-point try that was created from their own half.

The teams from both of the competitions are permitted to replace a red-carded player with a substitute after 15 minutes. In the Varsity Cup semi-finals and final, the respective captains and coaches will be allowed to use a white card to review a referee’s decision - each team will only be allowed one review each half.

Sticking to the 2021 rules, players may only be eligible to compete in this year's competition if they obtain 60 academic credits from the previous year.

“A key narrative of the 15th edition of the FNB Varsity Cup is the mental health of the student-athletes. Following a disruptive two-year period due to the pandemic, students have been forced to study remotely. It has taken a toll, stated Nesi.

“We aim to raise awareness and acknowledge the challenges that these rugby players face on a daily basis.”

We live in a world where facts and fiction get blurred
In times of uncertainty you need journalism you can trust. For only R75 per month, you have access to a world of in-depth analyses, investigative journalism, top opinions and a range of features. Journalism strengthens democracy. Invest in the future today.
Subscribe to News24
Next on Sport24
Ex-Lions coach, Bok assistant Swys gets Shimlas top job