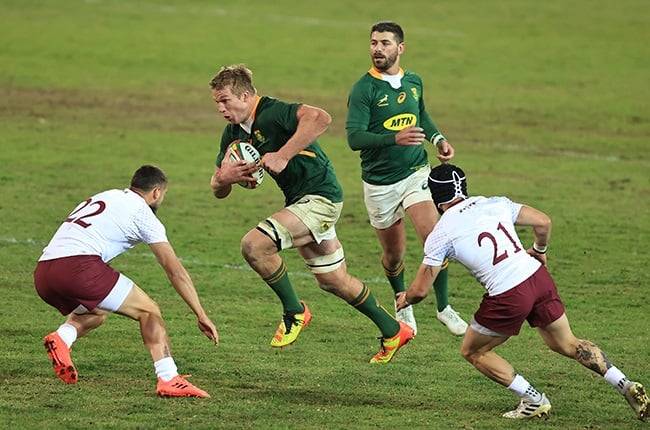 Pieter-Steph du Toit on the charge against Georgia... (Photo by David Rogers/Getty Images)

Du Toit signed with Verblitz from the Stormers in September and the shoulder injury that has kept him sidelined for large parts of 2021 appears to be a thing of the past.

"I'm very excited to be here with the guys. I enjoyed a full training session and I can't wait for the season ahead. I'm very excited," Du Toit said in a video clip posted by the club on social media.

Du Toit, the 2019 World Rugby Player of the Year, underwent shoulder surgery earlier this year which saw him miss the Springboks' Rugby Championship campaign and their year-end tour to the United Kingdom.

Du Toit returned to action earlier in the year after being sidelined since early 2020 with a serious injury that almost saw him lose his leg.

The 29-year-old was initially set to join Irish club Munster, before the big money move was vetoed by the Irish Rugby Football Union.

He then signed for Toyota Verblitz and will join up there with Springbok team-mate Willie le Roux.

We live in a world where facts and fiction get blurred
In times of uncertainty you need journalism you can trust. For 14 free days, you can have access to a world of in-depth analyses, investigative journalism, top opinions and a range of features. Journalism strengthens democracy. Invest in the future today. Thereafter you will be billed R75 per month. You can cancel anytime and if you cancel within 14 days you won't be billed.
Subscribe to News24
Next on Sport24
'Joyous' day for Cheetahs as Frans Steyn and Ruan Pienaar extend stays in Bloemfontein