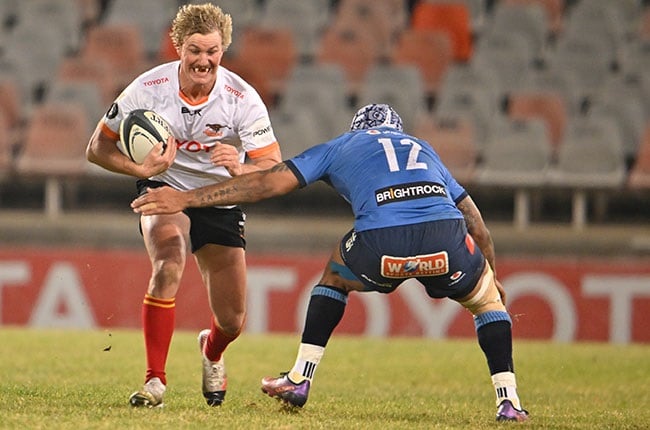 Chris Smit joined the Bulls from the Cheetahs. (Photo by Johan Pretorius/Gallo Images)

While concussion is no laughing matter, new Bulls recruit Chris Smit had to be stretchered off in the opening stages of the Toyota Challenge meeting with the Cheetahs in Bloemfontein on Friday afternoon after inflicting the injury on himself.

The 27-year-old utility back, whom Jake White calls on his first name of Barend (to avoid confusion with flyhalf and teammate Chris Smith), pounced on a sublime chip from Morne Steyn and then ran a superb angle to canter over the tryline.

However, in the process of completing an extravagant dive, he lost control of the ball, which shifted to his midriff, not only winding him but causing enough of an imbalance for him to smack his head on the turf.

To add insult to injury, Smit's try was overturned following a TMO review.

Chris Smit got his dive all wrong here after a great try. pic.twitter.com/Ci4PA6aZyq

Smit joined the Bulls from the selfsame Cheetahs during the off-season, with White considering the former Maties star as a useful squad option given his ability to play flyhalf and centre.

White stated earlier that the compact back would be in the frame for United Rugby Championship selection once he'd become more comfortable with the Bulls' system.

That process is now likely to be delayed for a few weeks.

We live in a world where facts and fiction get blurred
In times of uncertainty you need journalism you can trust. For 14 free days, you can have access to a world of in-depth analyses, investigative journalism, top opinions and a range of features. Journalism strengthens democracy. Invest in the future today. Thereafter you will be billed R75 per month. You can cancel anytime and if you cancel within 14 days you won't be billed.
Subscribe to News24
Next on Sport
Eddie Jones set to discover England fate