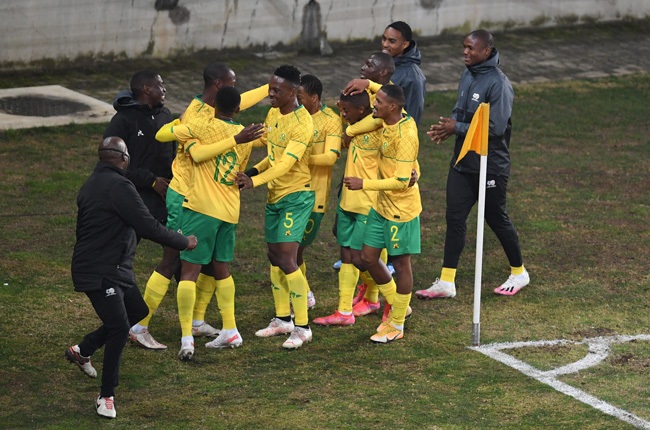 Bafana Bafana came from a goal down to ensure they remain undefeated against Uganda in a 3-2 victory on Thursday evening in Soweto at the Orlando Stadium.

AS IT HAPPENED | Bafana Bafana 3-2 Uganda

It was an international friendly encounter that came under scrutiny after six players that included forward Percy Tau, were ruled out for the clash due to positive Covid-19 tests and injuries.

With newly appointed head coach Hugo Broos being excused as he waits for his second vaccination jab in Belgium, assistant coaches Cedomir Janevski and Helman Mkhalele were given the reigns to control matters for the encounter.

However, just 24-hours before the match, Janevski also tested positive for Covid-19, putting the fixture in jeopardy.

But the South African Football Association (SAFA) refused to throw in the towel despite Mkhalele only having 17 players at his disposal for Bafana Bafana’s first match since March after failing to qualify for next year’s Africa Cup of Nations in Cameroon.

It was a nervous start for both sides, particularly for the home side, as they had five debutants starting the match.

However, after the 15th-minute mark, the visitors were warmed up enough to take the match to Bafana Bafana, and their attacking urgency paid off immediately.

Captain Emmanuel Okwi opted to put in an early cross before entering the final third of the pitch. On the receiving end, Ibrahim Orit beat Craig Martin to the ball to head it beyond Ronwen Williams's reach.

Four minutes later, the Cranes were in with a chance to double their lead after Sibusiso Mabiliso's failed attempt at clearing the danger resulted in the ball bouncing off Okwi, who then darted forward with the ball at his feet.

However, Williams did well in making himself big enough for Okwi to miss the target as the ball went wide.

At the sound of the whistle for half-time, South Africa did not record any shot at goal while committing ten fouls, while the Ugandans tested Williams on six occasions with two shots on target.

Mkhalele rang the changes for the second stanza as the inform Thabiso Kutumela and Evidence Makgopa replaced Denwin Farmer and Nkosinathi Sibisi.

The introduction of the two players proved to be pivotal as they were the key pairing for Bafana's equaliser as the home side switched from a 3-4-3 formation to a more familiar 4-3-3 formation.

Just 15 minutes after the restart, Kutumela dazzled his way forward after receiving the ball from midfield and teed up Makgopa, who levelled matters with the slightest of touches as he leapt forward to get a boot on the ball to score on his debut.

Two minutes later, Bafana Bafana took the lead through another player featuring for the first time in senior national colours.

Bongokuhle Hlongwane latched onto the ball in the 18th area and brushed off a red shirt before pulling the trigger, which took a fortunate deflection but rattled the back of the net.

The Bafana boys began to show comfort on the ball, and Makgopa ended off a beautiful interplay to score his second goal of the encounter. That goal proved to be the all-important match-winner, as Uganda scored their second through Abdul Lumala in the dying minutes of the match.

With three minutes of stoppage time, Uganda searched for an equaliser, but the new-look Bafana Bafana held their nerve and patience to give the home side a morale-boosting win on home soil.

In September, Bafana Bafana will be in action again when they start their 2022 World Cup qualifying journey with matches against Zimbabwe and Ghana.

We live in a world where facts and fiction get blurred
In times of uncertainty you need journalism you can trust. For 14 free days, you can have access to a world of in-depth analyses, investigative journalism, top opinions and a range of features. Journalism strengthens democracy. Invest in the future today. Thereafter you will be billed R75 per month. You can cancel anytime and if you cancel within 14 days you won't be billed.
Subscribe to News24
Next on Sport24
'It's a privilege' - Meet the doctor who will represent SA at FIFA World Cup