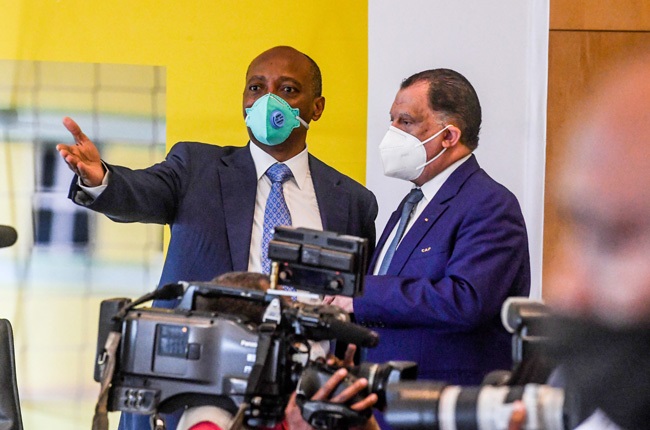 Now that FIFA has confirmed they have received the South African Football Association's (SAFA) complaint with regards to Maguette Ndiaye's officiating in Sunday's game against Ghana, the cat is firmly among the pigeons.

While it was true that Bafana Bafana didn't create enough goal-scoring opportunities to trouble Ghana, the 31st-minute penalty that Ndiaye gave to Ghana after Rushine de Reuck 'fouled' Daniel Amartey has reverberated around the continent.

SAFA will have a midday press conference on Wednesday where they are expected to go into the nuts and bolts of their complaint.

SAFA's complaint will most probably be guided more by Article 18 of FIFA's Disciplinary Code than article 14 of the 2022 World Cup's regulations.

Points 6 and 7 of the World Cup regulations are clear with how protests and complaints with regards to on-field matters concerning match officials.

No protests may be made about the referee’s decisions regarding facts connected with play. Such decisions are final and not subject to appeal unless otherwise stipulated in the FIFA Disciplinary Code. The same applies to any potential issue concerning the use of goal-line technology (GLT) and the video assistant referee (VAR) system.

This point effectively saves Ndiaye as it protects his on-field decisions and point 7, which reads as follows, also saves him from what could be termed as a frivolous complaint:

If an unfounded or irresponsible protest is lodged, the FIFA Disciplinary Committee may impose a fine.

Former match official Andile "Ace" Ncobo, who on SuperSport's PSL Live show explained he was part of SAFA's team that was dealing with the matter, dissected Ndiaye's performance and how FIFA will handle the matter:

“It took me five hours, 17 minutes to analyse just the first half.” ??

“89.3% incorrect decisions went against one team.” ??@AceNcobo comprehensively reviewed the referee’s decisions from the South Africa and Ghana clash. ?????????? ???????? ?? pic.twitter.com/lbL1lRfAaC

The two article 14 points could explain why SAFA chose to take the Article 18 option, the route taken by Senegal when they lost 2-1 to South Africa on 1 November 2016.

In that particular game, Ephraim "Shakes" Mashaba's last of his second tenure as Bafana coach, Senegal took umbrage with Ghanaian Joseph Lamptey's officiating, especially with the penalty conceded by defender Kalidou Koulibaly, which wasn't a penalty.

Bafana won the match 2-1 but, nearly a year later, were made to play a rematch after FIFA ruled that Lamptey had been guilty of influencing the outcome of the contest.

2. If a player or official engages in behaviour described in paragraph 1, the club or association to which the player or official belongs may be sanctioned with the forfeiting of the match in question or maybe declared ineligible to participate in a different competition, provided the integrity of the competition is protected. Additional disciplinary measures may be imposed.

3. Persons bound by this Code must cooperate fully with FIFA at all times in its efforts to combat such behaviour and shall therefore immediately and voluntarily report to the secretariat of the Disciplinary Committee any approach in connection with activities and/or information directly or indirectly related to the possible manipulation of a football match or competition as described above. Any breach of this provision shall be sanctioned with a ban of at least two years on taking part in any football-related activity and a fine of at least CHF 15,000.

4. The Disciplinary Committee shall be competent to investigate and adjudicate all conduct on and off the field of play in connection with the manipulation of football matches and competitions.

Lamptey was banned for life for breaching FIFA's Disciplinary Code.

The 'influenced' game was replayed on 10 November and Senegal won 2-0 to pave their way to qualifying for the 2018 World Cup that took place in Russia.

The tough part for SAFA will is having to prove Ndiaye unduly influenced the result of the game, even though Ncobo's analysis showed how the Senegalese match official made the bulk of the match calls in favour of the home side.

Either way, SAFA has embarked on the precedent that was used against them four years ago and whether it will come off, in the same way, will remain to be seen.

From a scheduling perspective, the 21-29 March 2022 FIFA window stands as the period for when a replay can take place.

It is the final window before the World Cup draw that will take place in April of next year, something that'll leave both associations on tenterhooks and FIFA having to resolve the matter speedily.

We live in a world where facts and fiction get blurred
In times of uncertainty you need journalism you can trust. For 14 free days, you can have access to a world of in-depth analyses, investigative journalism, top opinions and a range of features. Journalism strengthens democracy. Invest in the future today. Thereafter you will be billed R75 per month. You can cancel anytime and if you cancel within 14 days you won't be billed.
Subscribe to News24
Next on Sport24
'It's a privilege' - Meet the doctor who will represent SA at FIFA World Cup