A Tebogo Mokoena free-kick in the first half earned Bafana Bafana a 1-0 win against neighbours Botswana at FNB Stadium on Tuesday.

Sibongiseni Mthethwa and Siyanda Msani were handed their debuts as Veli Mothwa started in goal ahead of captain Ronwen Williams.

Ashley Du Preez, Pule Mmodi and Khanyisa Mayo led the attack, while Goodman Mosele and Mokoena played behind in midfield.

It was expected to be a tough match as combinations, especially in attack where would seem to offer problems, and that was the case throughout the game.

But Mokoena, who netted his fourth goal in senior national colours, ensured Broos earned his second win on the trot as Bafana boss, with the national team set to assemble in November again for a camp before the FIFA World Cup.

Broos wanted his charges to earn a confidence boost in this international window and got his wish as Bafana ran riot again on Tuesday except with less prolific finishing at the business end of the field.

Du Preez and Mayambela had chances to add gloss to the score-line but missed opportunities.

93' Seakanyeng now hits the woodwork as the Botswana forward beats Mothwa with his fierce strike.

91' CHANCE! Mayamabela hits the side post after weaving his way past the Botswana defence.

87' CHANCE! Mayo again into space after Mudau sets him free. Mayambela is with him on the flank but Mayo does not see him and opts for the cross that is too high for Mmodi.

85' Mokoena in the clear and he darts forward with Mayambela and Mmodi playing catch up.

The Sundowns midfielder plays it square for Mayambela who attempts to dummy the ball hoping Mmodi gets a hold of it, only for a Botswana defender to clear the danger.

81' CHANCE! Botswana are threatening and after a great corner kick and clearance from Bafana the ball eventually lands in the path of Mosha who just needed to get his effort on target to equalise but he skies it.

79' WOW! What a save Orebonye rounds Mothwa and Botswana are in with a chance to score. But De Reuck makes a heroic sliding save that blocks Orebonye's shot.

Brilliant defending but Botswana are searching for an equaliser.

72' Mayambela has joined the fray in place of Du Preez.

Teboho Mokoena got an opener for Bafana Bafana against The Zebras!

63' Substitution: Luke Le Roux has now come onto the field, with Mosele given a break. Broos makes his first and only change of the game so far.

54' We have to add after his blip with failing to honour a Bafana call-up, Mosele has come good under Broos and has shown his quality - in this fixture as well.

49' CHANCE! A teasing cross from Du Preez into the Botswana penalty area sees their defence failing to clear the danger as the ball lands to Mmodi.

However, the Golden Arrows forward has a bad first touch and the keeper rushes out to glove the ball just as he releases his shot.

As expected no changes for Bafana Bafana.

45' We're back. And the whistle sounded for the second-half.

The first-half was not, by all means, bad given that Broos has amended his starting XI. The front three certainly need to have faith in their ability and test the keeper more often. There is enough quality between the three of them to do so.

As the match progressed, the midfield trio of Mosele, Mokoena and Mthethwa began to find the gaps and made some crucial passes.

Bafana should earn a victory but can they score one or two more goals? We will have to wait and see, especially as coach Broos are likely to make some changes in the final 20 minutes of the second-half.

42' That goal would give Bafana more freedom and a bit of calmness and confidence in how they move forward and attack. You'd think that Broos will keep the same 11 for the opening fifteen minutes of the second stanza.

It is his fourth goal in Bafana colours and I dare say (under correction) that is his second goal from a free-kick position.

None other than Tebogo Mokoena from a dead-ball situation. The Mamelodi Sundowns midfielder, from 20 yards out neat strikes a low, hard and dipping free-kick past Botswana's keeper.

35' Again and again - the decisions that the front three have made in prime opportunity positions in the field of play has always, up to this point of the game, been below par.

We need better. We deserve better!

28' The Bafana midfield is finally seeing the gaps and Mokoena finds Du Preez, who makes the perfect run but a rush defence sees the Chiefs man pulls the trigger on a soft shot that the goalkeeper easily gloves.

26' CHANCE! Mmodi plays a searching ball towards Du Preez who uses his pace to his advantage.

The ball bounces and flights beyond Botswana goalkeeper Malapelaea's reach and Du Preez snatches it but another bounce allows the 'keeper to react quickly and blocks Du Preez's attempt at goal.

24' Bafana are static and the movement is not great and threatening enough. But it is understandable as this is the first time these players have been paired together.

22' Khanyisa Mayo strikes Bafana's first effort on goal with a free-kick that floats over the crossbar.

16' Not the most entertaining game. Poor decision-making from both teams, especially in the final third of the field.

11' Botswana testing the waters offensively but Bafana has thus far defended well enough as no serious goal threat has occurred just yet.

Only Mothwa, Mudau, Xulu, De Reuck, Mokoena and Mosele, who are starting this game, are regular Bafana call-ups - the others have gotten their first taste of donning the famous jersey.

4' Botswana seeing more of the ball at the moment in the opening stages of this encounter.

We have to bare in mind that this is another new-look Bafana side compared to the team that started against Sierra Leone.

1' The first half is now underway at FNB Stadium ...

Coach Hugo maintains that every player will be given a chance, tomorrows line up will be different. #BafanaPride #InternationalFriendlies #journeytoAFCON pic.twitter.com/kSFgbztqZQ 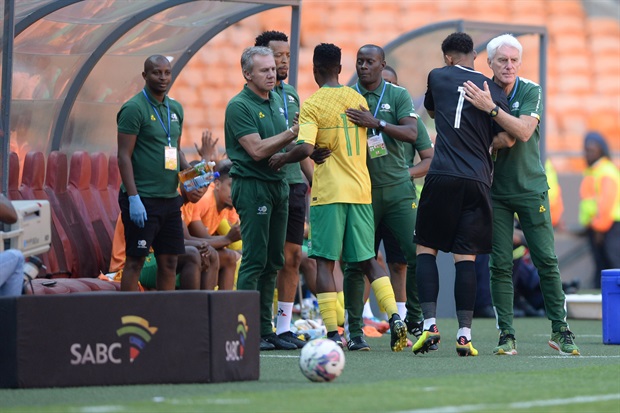 Zwane says 'age is but a number' after scoring a brace on Bafana return
READ FULL STORY! Themba Zwane opened the scoring at the FNB Stadium in the 33rd minute before Mihlahi Mayambela added a second five minutes into the second half on his debut for the national team.

Zwane doubled his tally with 64 minutes on the clock and Aubrey Modiba completed the scoring.

Bafana Bafana will be hoping to make it two wins on the trot after their 4-0 thumping of Sierra Leone over the weekend.

LIVE scoring and commentary of the international friendly encounter between Bafana Bafana and Botswana.

Go to top
We live in a world where facts and fiction get blurred
In times of uncertainty you need journalism you can trust. For 14 free days, you can have access to a world of in-depth analyses, investigative journalism, top opinions and a range of features. Journalism strengthens democracy. Invest in the future today. Thereafter you will be billed R75 per month. You can cancel anytime and if you cancel within 14 days you won't be billed.
Subscribe to News24
Next on Sport
Coach Broos blames fatigue for Angola result: 'There was a lack of freshness'