As it happened | Bafana Bafana 3-2 Uganda That's all folks, thank you for joining Sport24 for our LIVE coverage as a new-look Bafana Bafana defeated Uganda by 3-2 in an exciting International Friendly at Orlando Stadium. I think Bafana Bafana is ready to play in the EURO 2021. there is no competitions for us in Africa

What a great game, when the whistle blows, Mzansi shows up, and we saw the fire and gees on the field tonight! ?? Well done @BafanaBafana! ??

The referee blows the final whistle as an exceptional second-half performance saw Helman Mkhalele's Bafana Bafana side turn things around to grab a morale-boosting win at Orlando Stadium! The fourth official signals a minimum of 3 minutes of additional time.

The visitors grab a goal back as substitute Abdul Lumala heads the ball home from close-range from a corner-kick.

85' What a turnaround for Bafana Bafana and assistant coach Helman Mkhalele who made the right substitutions at the right time to turn the game on its head.

81' Makgopa makes amends for his earlier miss as he grabs his second goal of the match with a low strike into the bottom corner.

78' Bafana should have extended their lead as Makgopa was again involved but failed to score when he should have passed to three teammates who were in an ideal position to score.

The boys have turned things around in the second half.

66' Fellow debutant Bongokuhle Hlongwane gathered the ball on the right flank before cutting in onto his weaker foot.

The lanky striker then unleashed a powerful shot from outside the area that received a fortuitous deflection to register his first Bafana goal.

What a turnaround as the home side score twice in the space of five minutes as Bongokuhle Hlongwane gives Bafana Bafana the lead.

Substitute Evidence Makgopa scores on debut as Bafana Bafana pull one back to draw matters level.

Uganda continue to hold their own as the home side go in search of an equaliser by getting onto the front foot after their attacking substitutions.

46' We're back underway at the Orlando Stadium as Bafana Bafana look to get back into the contest.

Helman Mkhalele makes a double change as he looks to impact the game in the second period.

The half-time statistics make for bleak reading if you're a Bafana Bafana fan as the home side has recorded zero attempts at goal.

The Uganda Cranes hold the lead as the two sides head into the half-time break! 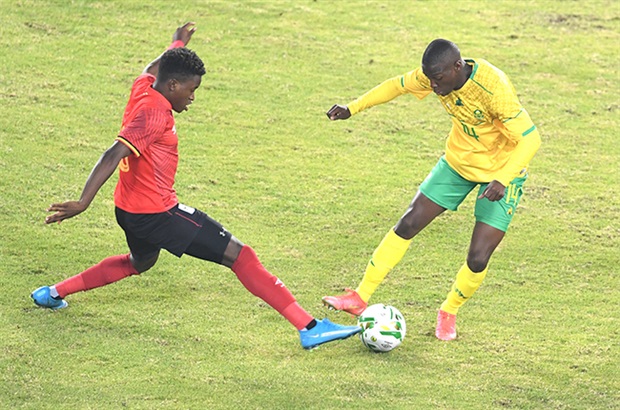 40' Uganda captain Okwi with 26 national team goals to his name continues to look the danger-man for the visitors as he goes close with a header.

39' Farmer makes a swift recovery and rejoins the action as the technical team were looking to make a change if necessary.

38' A long stoppage of play to allow Denwin Farmer to receive medical attention sees the make-shift midfielder stretchered off the field after suffering what looks like a wrist injury.

30' With a half-hour of action gone, Uganda have looked confident on the ball and show no sign of being intimidated by the hosts.

The Cranes after taking the lead continue to build attacks from the back as Bafana look to hit back in this contest.

Uganda are all over Bafana Bafana like a bad rash. That goal came way too easy.

Captain Emmanuel Okwi almost get the second for the visitors moments later but slices his shot narrowly wide.

16' Orit did exceptionally well to get on the shoulder of the Bafana Bafana defence at the back-post to get a head on an equally impressive cross by captain Emmanuel Okwi.

16' Uganda take a shock lead as Ibrahim Orit ghosts in at the back post to give the visitors the lead with a clinical header!

With Craig Martin on the right and Sibusiso Mabiliso on the alternate wing as wing-backs.

1' Uganda get us underway at the Orlando Stadium!

Bafana Bafana players during their pre-match pitch inspection of the Orlando Stadium pitch ahead of kick-off.

A moment with the Captain ?? pic.twitter.com/dUz4R9rZRu

The Uganda Cranes players in high spirits ahead of their clash against Bafana Bafana at Orlando Stadium.

Belgian Hugo Broos is the new Bafana coach, but he will not be attending this match either as he is still in Belgium receiving his Covid-19 vaccination.

That leaves Bafana legend and current assistant coach Helman Mkhalele as the man in charge of the side today.

Still, this is the dawn of a new Bafana Bafana era and the national side's first match since the sacking of coach Molefi Ntseki.

Bafana Bafana's squad has been hit hard by positive Covid-19 tests and there are a total of SIX players unavailable for the match, while assistant coach Cedomir Janevski has also tested positive for the virus and will not be involved.

Hello everybody and welcome to our LIVE coverage of Bafana Bafana's international friendly against Uganda from Orlando Stadium in Soweto.

PREVIEW | Depleted Bafana face unknown Uganda test
Go to top
We live in a world where facts and fiction get blurred
In times of uncertainty you need journalism you can trust. For 14 free days, you can have access to a world of in-depth analyses, investigative journalism, top opinions and a range of features. Journalism strengthens democracy. Invest in the future today. Thereafter you will be billed R75 per month. You can cancel anytime and if you cancel within 14 days you won't be billed.
Subscribe to News24
Read more on:
bafana bafanasoccer
0'
Kigonya, Hassan, Kayondo, Mukwala, Mugulsi, Walusimbi, Lukwago, Kakooza, Byaruhanga, Abdu, Mbowa, Sserwadda
0'
Uganda: Watenga, Willa, Juuko, Kwaliwa, Kizza, Kagimu, Lwanga, Waiswa, Okello, Orit, Okwi
0'
SUBS: Bvuma, Ngcobo, Modiba, Makgopa, Kutumela.
0'
Lineups for the game are as follows: Bafana Bafana: Williams, Maela, De Reuck, Sibisi, Mabaliso, Farmer, Brooks, Maboe, Martin, Mkhulise, Hlongwane.
0'
Hello and welcome to today's coverage of the friendly international between South Africa and Uganda at the Orlando Stadium in Soweto.
1'
Uganda have got the game underway.
2'
Watenga comes out to collect a ball directed to the Uganda penalty area.
4'
Uganda clear the ball from the back.
5'
A cross from Orit goes out and Bafana have a goal kick.
6'
Watenga punches away a ball sent towards the Uganda area.
8'
South Africa play the ball from the back.
9'
South Africa's Farmer is dispossessed as Uganda launch an attack.
10'
Orit does well to intercept a through ball from the South Africans.
11'
Maboe's corner is cleared away and a free-kick is given against Bafana.
11'
A free-kick from Maboe is cleared behind for a Bafana corner kick.
14'
Farmer and Williams exchange passes as SA look to play from the back.
15'
Maboe is fouled and SA play short passes from a free-kick close to the half-way line.
16'
Maboe's free-kick from distance goes out of play.
16'
South Africa have so far had 52% possession and Uganda 48%
18'
GOAL! UGANDA! ORIT! Orit meets a cross with his head to give Uganda the lead. SA 0-1 Uganda.
19'
Uganda have a goal kick.
20'
CLOSE! Okwi nearly doubled the lead for Uganda.
22'
Uganda keeper Watenga gets to the ball before Hlongwane can.
24'
Watenga plays a Uganda goal kick short.
26'
The ball is back to Uganda keeper Watenga who plays the ball short to a defender.
27'
De Reuck did well to see the ball out and earn Bafana a goal kick.
28'
Watenga comes out of his box to clear the ball away.
31'
Should Bafana lose today, it will mark the first time that they have lost to Uganda.
34'
Uganda have a corner.
37'
Uganda have been the more lethal side in attack so far as there is a stoppage in play.
39'
The referee gets the game back underway with a drop ball as Farmer plays the ball from the back for Bafana.
40'
Both sides are using this game to prepare for 2022 World Cup qualifiers.
41'
Lwanga of Uganda gets the first yellow card of the game.
43'
Williams lines up a goal kick for Bafana.
44'
A header from Okwi goes behind for a Uganda corner.
45'
Bafana make a change as Makgopa is on for Sibisi.
45'
HALF TIME: SOUTH AFRICA 0-1 UGANDA
45'
There will be three minutes of first half stoppage time.
45'
Bafana clear the corner. A powerful shots ends up coming in but Williams is alert to make a save.
46'
The second half is underway at the Orlando Stadium.
47'
A header from Okwi is way wide.
49'
Bafana have their first shot on target and a sharp save is forced from Watenga.
51'
Kutumela lines up a free-kick for Bafana
52'
Watenga lines up a goal kick for Uganda.
53'
Maboe takes a speculative shot but is off target.
55'
Hlongwane has a shot but it is blocked by a Uganda player.
58'
Okwi wins a corner for Uganda as De Reuck plays the ball out.
60'
Watenga plays the ball downfield.
61'
Mabaliso's cross is cleared out and Bafana have a corner.
62'
GOAL! SA! MAKGOPA! A ball was whipped in before Makgopa produced a neat finish. SA 1-1 UGANDA
64'
CLOSE! Kutumela shot from close range but Watenga made an alert save.
65'
Uganda make a change as Mukwala is on for Okwi.
66'
Watenga lines up a goal kick.
67'
GOAL! SA! HLONGWANE! Hlongwane produced a neat finish from just inside the box to put Bafana in the lead. SA 2-1 Uganda
68'
Williams plays a goal kick short.
69'
Watenga takes a goal kick for Uganda.
70'
Williams takes a goal kick for Bafana.
71'
Watenga clears the ball downfield for Uganda.
73'
Uganda have a free-kick in a promising position.
74'
Uganda go for goal from the free-kick but its over and fails to test Williams.
76'
A cross from Uganda goes straight to Williams.
78'
GOOD SAVE! Watenga produced a good save to deny Bafana a third from point blank range.
80'
Uganda make a change as Lumalla is on for Okello.
81'
GOAL! Makgopa scores his second from close range after being played in by Brooks. SA 3-1 UGANDA
81'
Bafana make a change as Modiba is on for Hlongwane.
83'
Williams was fouled and then clears the ball downfield.
85'
Williams plays the ball downfield from a free-kick.
86'
Willa earns a yellow card and Bafana will have a set-piece from out wide.
87'
Uganda make a change as Mugulusi is on for Orit.
87'
Uganda were on a strong counter attack but Williams came out of his box to clear.
89'
GOAL! UGANDA! LUMALA! Lumala tucks the ball home from the corner. SA 3-2 UGANDA
90'
There will be three minutes of second half stoppage time.
91'
A header from a Uganda corner is over.
93'
FULL TIME: SA 3-2 UGANDA
Next on Sport24
WRAP | 2022 Women's Africa Cup of Nations