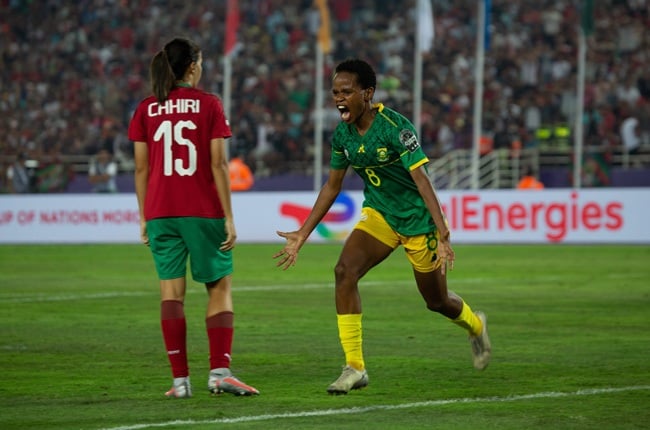 Three goals were scored in the second half, with Hildah Magaia netting a brace and Rosella Ayane putting fear into the visitors late in the match with her consolation strike.

But the South African ladies earned a hard-fought victory against a determined Moroccan outfit, who were eager to raise the trophy in front of 52 000-strong home crowd.

It was also the first time since Bafana Bafana's heroics in 1996 that a senior national football team was victorious in the Nations' Cup.

Banyana return to South Africa on Tuesday, 26 July, with gold medals and an unbeaten streak more than a month since arriving in Rabat, Morocco, on Wednesday, 22 June, more than a week before the tournament kick-started.

Slender 1-0 victories against Tunisia and Zambia in the quarter-finals and semi-finals, respectively, set up the final against Morocco, who knocked out Nigeria to ensure that a first-time champion will be crowned.

It was a nervy start to the final. Both Morocco and Banyana could not muster clean enough passes as the roars from the sold-out crowd looked to have gotten to the players on the field.

However, Banyana threatened first when Jermaine Seoposenwe showed tenacity in bursting forward, fending off a Moroccan defender in the hosts' penalty area before knocking the ball towards Magaia, who put a strike towards the goal, but her effort was too gentle as a red shirt cleared the danger.

Magaia would get another chance courtesy of the help from Seoposenwe, who again provided the perfect pass to her teammate.

This time, however, Magaia attempted to chip the ball over the Moroccan goalkeeper Khadija Er-Rmichi but it ricocheted off the shoulder, and the Banyana forward attempted to backheel it into the back of the net on her second attempt, only for Nesryne El Chad to boot the ball out the danger area.

On the cusp of half-time, Morocco nearly broke the deadlock as Fatima Tagnaout darted beyond the Banyana defence and played in the perfect low cross in the 18th area with Ayane arriving late, but her left-footed strike went narrowly wide.

For all of her missed goal-scoring chances throughout the tournament, Magaia netted the opening goal 18 minutes into the second period that Seoposenwe superbly assisted. Nine minutes later, Magaia doubled Banyana's lead, dinking the goalkeeper as she dove to stop the strike.

However, in almost typical South African fashion, it would become even more of a nervy ending as Morocco's Ayana netted in the 80th minute with nine minutes of stoppage time added on. Somehow, through grit and character, they held on to clinch their first African title.

Morocco's Ghizlane Chebbak has been named Player of the Tournament.

*It confirmed to be decided at the end of the final.

Banyana Banyana will return to South Africa on Tuesday, 26 July.

Banyana arrived in Morocco on Wednesday, 22 June and have gone all the way to the final on Saturday, 23 July.

Incredible scenes. Elation. What a game. History makers, Banyana have done the unthinkable. Over forty days in camp including the tournament in Morocco.

There are tears of joy and sorrow. There are frowns and there are smiles.

The South Africans are dancing and are deserved winners.

Time to party (in) South Africa!

BANYANA BANAYAN ARE CHAMPIONS OF AFRICA!

96' Every ball won by Banyana is booted out instead of simply controlling the game.

95' Nervy moments for both Morocco and South Africa.

91' Banyana seem nervous as they are simply just knocking the ball into the hands of Morocco. No game management in these gut-wrenching moments.

88' The whole Moroccan team excluding their goalkeeper are in the Banyana end of the pitch as they force this late onslaught.

87' Banyana doing all they can do to defend this lead. Can they do it? Minutes away now ...

86' During all the chaos Magaia has been replaced with what seems to be cramp. Kgadiete is now on in her place.

84' Banyana look tired and Morocco look as if they have found their second wind as they search now search for an equaliser.

Morocco gets the better of Banyana who have now lost all concentration as it is 2-v-2 with Tagnaout plays in Ayane who then with ease slots in a low strike beyond the Dlamini's reach.

The all-important cushioning second goal by Banyana is courtesy of Magaia as she dinks the 'keeper - and this time the ball rolls over the goal line despite it being chased down.

What a build-up to a special goal!

Seoposenwe receives a searching ball on the left flank and she darts forward with pace fending off a Moroccan defender and tees it up for Magaia. And after several missed chances before, she ensures that she laces it beyond the goalkeeper's reach to take the lead.

60' Jane has now played two bad passes during an enthralling counterattack by South Africa. She looks leggy and perhaps tired.

FACTS: Nigeria are the most successful country in the competition, winning the title on 9 occasions, the joint most continental titles in Women’s Football along with China (AFC) and the USA (CONCACAF).

54' SUBSTITUTION: Hassani comes on for Saoud.

FACTS: This is South Africa’s 7th meeting with a WAFCON host. They have lost all of their previous six encounters against the hosts.

Morocco are the fourth host nation they will face along with Cameroon, Equatorial Guinea and Nigeria.

It is their third meeting in a final with a host. They lost to Equatorial Guinea in 2008 and 2012.

48' Surprising that there were no changes from either bench to invigorate the second half.

45' We're now underway as the whistle sounds of the second stanza. What a moderately entertaining 45 minutes in where Banyana should be grabbing the bull by the horns. Victory is there for the taking.

Morocco has not faired well in the final third but has shown that if given space and time they could pull the trigger.

Meanwhile, Banyana again missing that killer instinct in front of goal but can certainly redeem themselves in the second stanza.

40' WOW! What a great passage of play for Morocco. Tagnaout with immense pace darts forward on the left flank and has time to put in a low cross into the Banyana penalty area. Ayane charges in with pace and was slightly too eager as she had to reach from an uncomfortable position to get her left boot onto the ball, which she did.

Her effort, however, goes wide and for a goalkick.

39' CHANCE! Magaia knocks 30-yard free-kick well wide with a left strike. She indeed has had now three opportunities at goal with all unanswered.

FACTS: South Africa are participating in their fifth WAFCON final. They have now reached a final in Central, West, North and Southern Africa and are the first team to reach WAFCON finals in four hemispheres of the continent. It is the first time they have reached back-to-back finals.

36' What a golden chance for Banyana as Seoposenwe is the provider to Magaia who charges forward and attempts to dink the 'keeper but Er-Rmichi saves it but not out of danger. Magaia latches onto the ball again with a back flick towards the goal but El Chad boots it to safety.

34' First yellow card of the evening is given to Ramalepe for a challenge Tagnaout.

25' Chebbak sends a searching ball into the penalty area from a dead-ball situation but Seoposenwe deals with it and knocks it out for a corner-kick but the referee deems it to be a goal kick instead for South Africa.

The Moroccans are not happy with that decision.

FACTS: Host nations have lost in the final twice previously, South Africa in 2000 and Cameroon in 2016, both to Nigeria.

Victory for either nation will see them become the second country along with Nigeria to have their men’s and women’s teams crowned continental champions.

18' A very reserved approach now as each team attempting to find space when on the ball but the result in the final third of the pitch for both Morocco and Banyana has not worked out.

FACTS: The 2018 final is the only edition to end 0-0 and be decided on penalties. Nigeria won a 9th title, defeating South Africa on spot kicks.

11' Magaia calls for a penalty after Tagnaout, who is out of position, gets a touch of the ball before bringing down the Banyana midfielder.

8' It has been a shaky opening minutes from both sides, which is to be expected. Plenty of missed passes and professional fouls. All should change, I suspect after the 15/20 minutes.

Go to top
We live in a world where facts and fiction get blurred
In times of uncertainty you need journalism you can trust. For 14 free days, you can have access to a world of in-depth analyses, investigative journalism, top opinions and a range of features. Journalism strengthens democracy. Invest in the future today. Thereafter you will be billed R75 per month. You can cancel anytime and if you cancel within 14 days you won't be billed.
Subscribe to News24
Read more on:
moroccobanyana banyanawomens afconsoccer
Next on Sport
LIVE | Bafana Bafana v Botswana