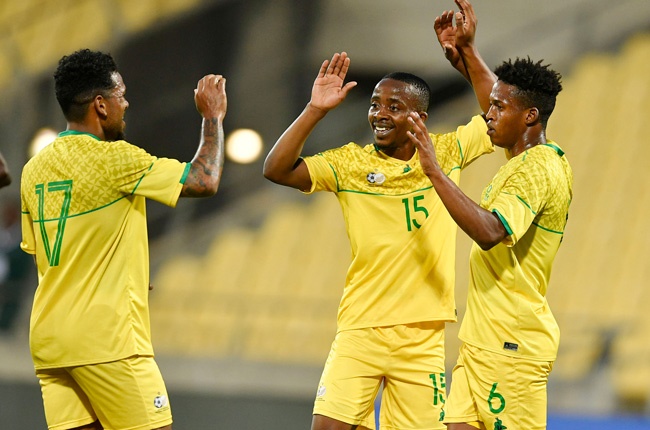 Bafana Bafana were held to a 1-1 draw against a plucky Namibia in Rustenburg at the Royal Bafokeng Stadium on Thursday evening.

AS IT HAPPENED | BAFANA BAFANA 1-1 NAMIBIA

It was South Africa's first outing in nearly a year as they last played in November 2019 against Sudan in a 2021 Africa Cup of Nations (AFCON) qualifier.

The national men's senior side were scheduled for a camp in late March during the FIFA international break, but the Covid-19 pandemic brought a halt to those plans.

And now, over six months later, Bafana Bafana took to the field for the first time in 11 months as they prepare for two AFCON qualifiers against Sao Tome in November.

South Africa started the match on edge with the players looking nervous as Namibia threatened early on.

Newly signed Mamelodi Sundowns striker and Namibian captain Peter Shalulile's pace and movement kept the Bafana defence on their toes but there was no real goal threat to worry goalkeeper Ronwen Williams.

However, as the match progressed, Molefi Ntseki's charges began to show more composure on the ball as they settled in.

Luther Singh was the first to get South African engine purring with his pace on the left flank as he teed up Kermit Erasmus, who saw his shot deflected for corner.

Moments later the two would combine again to give Bafana Bafana a 1-0 lead in the 19th minute.

Keagan Dolly pounced on a sleeping Namibian defence and stole the ball, with the Montpellier winger playing in Erasmus.

Erasmus then found Singh and the 23-year-old made no mistake as he netted from close range.

South Africa were in cruise control for the remainder of the first half but Shalulile was a constant threat.

The 25-year-old shifted himself into some space as Namibia triggered a counterattack, however, the forward failed to force a save out of Williams as his shot went well wide.

Bafana then had a chance to go two goals up after Thabo Nodada and Dolly's sweet exchange saw the final pass to Singh over-hit.

But the second half would see the Brave Warriors strike within the first 10 minutes of the restart after Ntseki introduced Gladwin Shitolo and Lyle Forster for Mothibi Mvala and Erasmus.

South Africa's defensive lapse saw Absalom Iimbondi chest the ball beyond his man and hit a low shot through the legs of Williams.

Goss would immediately be involved as he made a superb stop from a shot by Namibia's Joslin Kamatuka.

Try as they might, South Africa struggled to threaten the Namibian goal again and the match ended in a draw.

Bafana Bafana are back in action on Sunday against 2012 AFCON champions Zambia at the same venue.

We live in a world where facts and fiction get blurred
In times of uncertainty you need journalism you can trust. For only R75 per month, you have access to a world of in-depth analyses, investigative journalism, top opinions and a range of features. Journalism strengthens democracy. Invest in the future today.
Subscribe to News24
Related Links
PREVIEW | Bafana Bafana aiming to find winning momentum against Namibia
Bafana captain Thulani Hlatshwayo 'happy' to see national team-mates' faces again
SABC clears air, confirms Bafana Bafana's clash against Namibia will be televised
Next on Sport24
Khune, Zungu included in Bafana Bafana squad for crucial AFCON qualifiers