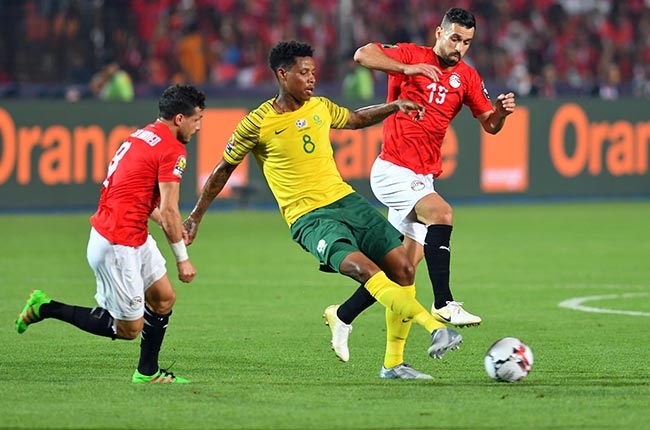 Bongani Zungu in action for Bafana Bafana during the African Cup of Nations Last 16 match against Egypt in Cairo on 6 July 2019.
Ahmed Hasan/Gallo Images

The South African Football Association (SAFA) has endorsed an application that will enable amateur South African clubs to claim their share of what's been estimated to be between $400 million (R6.7 billion) and $1 billion (R16.9 billion) in FIFA Solidarity and training compensation funds.

The product is called MySAFA and was developed by a company called Inqaku with close relations with SAFA.

MySAFA is building a player database of South African players throughout the football landscape in the country, from the ages of 12 to 23, assisting with issuing of FIFA Passports, the unique identification number that will soon allow clubs developing players to be able to claim from FIFA Clearing House.

FIFA Clearing House was developed in 2018 after the world football governing body sought to reform the current player transfer system and to streamline their training rewards system, called the FIFA Solidarity Mechanism.

The Solidarity Mechanism allows them to better apportion 5% of every international transfer fee of a player to the amateur clubs that contributed to his scouting and early football development.

There's a massive backlog awaiting FIFA as well as member nations, plus companies such as Inqaku, who have lent their services to this mammoth task of getting these unclaimed billions in the right hands.

But for this to happen, especially in a smoother way in the future, amateur clubs would need to register all their players into the MySAFA database, using ID numbers and other identification mechanisms.

Inqaku estimated that there were 40 000 South African clubs and 3 million players in official leagues across the country.

"In the past, the problem has always been that there's no centralised database or no authoritative record of where players played," said MySAFA developer and Inqaku COO Jason Anderson.

"Around 2015, FIFA started to build what's now called the FIFA Connect initiative. The objective of it is to register every player in the world over the age of 12 into their member association's electronic registration system.

"And so, we were one of the first member associations in Africa to register with FIFA Connect. At the time it wasn't entirely clear why but it gradually became clear that FIFA was building in the background the mechanisms to automate training rewards payments to clubs.

"Today, when a player signs his first professional contract up to the age of 23, it should be that all of the (amateur) clubs that trained that player, will be compensated.

"If the player then transfers internationally to another club, there’s another type of compensation that kicks in called the FIFA Solidarity Mechanism. It means 5% of that international transfer fee is supposed to be paid to the clubs that trained that player."

Anderson used Bongani Zungu's example, who, before signing his first Premier Soccer League contract with the University of Pretoria (AmaTuks) in 2013, was on the books of now-defunct Dynamos FC.

Since then, the Bafana Bafana international midfielder has transferred from AmaTuks to Mamelodi Sundowns before landing his first overseas move to Portuguese club Vitoria Guimaraes and eventually to French club Amiens.

Along the way, a portion each transfer fee paid by the buying club was meant to go to Dynamos and other clubs Zungu might have played for from the age of 12, with 5% kicking in when he transferred overseas. Failing which, those funds are meant to be apportioned to SAFA.

"When it looked like Bongani Zungu was going to be signed by Glasgow Rangers a month or so ago - now it looks again like he might be - out of curiosity I started asking people where he played,” said Anderson.

"I knew he played for Dynamos in the ABC Motsepe League but where did he play before that? When you start asking those questions, you get different answers from different people. It becomes difficult and he might have played for multiple amateur clubs at the same time.

"The last time Zungu signed an international transfer, when he moved to Amiens, it looked like there was a Solidarity payment (supposed to be) made to his old club Dynamos but they were no longer in existence.

"FIFA regulations on this state explicitly that, when a club is no longer in existence, the money is payable to the association and used for development. Whatever money was payable to Dynamos, probably should have been paid to SAFA. That's just one example."

FIFA Clearing House was meant to start issuing payments to amateur clubs officially in July this year but plans were postponed to early 2021 because of the Covid-19 pandemic.

"When the FIFA Clearing House becomes operational in 2021 and a player signs an international transfer, it will check our database for records of where this player played since the age of 12," said Anderson.

"In this new electronic world, we are now able to trace players and their training clubs because we have a centralised database.

"It will, via the information we've gathered, automatically pay those clubs or pay the association, whichever is appropriate.

"If you try to register a player for a club in eMalahleni, for example, but he’s already registered at a club in Port Elizabeth, the system blocks that registration.

"All of those registrations are shared with FIFA via their FIFA Connect electronic interface and saved at FIFA."

The other side of the project deals with training compensation, which FIFA has also apportioned large amounts of money towards.

"There's an estimated $1 billion over the last 10 years in unclaimed FIFA training compensation - an insane amount of money, that should be going to amateur clubs," said Craig Rivett, who handles the insurance since of Inqaku's business.

"It's such a simple thing to solve. You just have to know who plays the sport."

There are many spinoffs to MySAFA as well, such as limiting illegal player movements between clubs across the country and, of course, helping to combat the global scourge of age-cheating.

"We have a live interface to Home Affairs, so when the player's ID number goes into the system, we fetch personal details from Home Affairs instantly," Anderson said.

"The person registering the player can compare the information they've got from Home Affairs to the information that's supposedly an authentic ID that’s uploaded. Once a player is registered, you can’t change their birth date.

We live in a world where facts and fiction get blurred
In times of uncertainty you need journalism you can trust. For only R75 per month, you have access to a world of in-depth analyses, investigative journalism, top opinions and a range of features. Journalism strengthens democracy. Invest in the future today.
Subscribe to News24
Related Links
David Moyes discovered positive test after arriving at London Stadium
Man City want to win everything this season: De Bruyne
Alvaro Morata returns to Juventus on loan from Atletico Madrid
Next on Sport24
Itumeleng Khune returns as Molefi Ntseki names squad for AFCON qualifiers