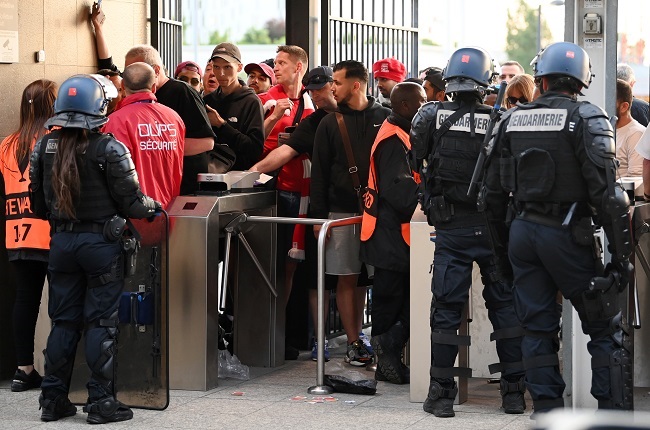 The kick-off of Saturday's Champions League final between Liverpool and Real Madrid in Paris was delayed "due to a security issue", UEFA said on Saturday.

The match was supposed to kick off at 21:00  at the Stade de France but announcements in the ground said the hold up was caused by the "late arrival" of supporters.

Police sources told AFP that supporters tried to force their way through the first ticket checkpoint outside the stadium - situated in the northern Paris suburb of Saint-Denis - but that access to the venue remained "watertight".

Thousands of supporters were still massed outside the stadium with half an hour to go to kick-off.

Tear gas was fired by police after several dozen people attempted to climb over barriers, according to an AFP journalist on the scene.

"For security reasons, the UEFA Champions League final kick-off has been delayed by 15 minutes," UEFA tweeted, although that delay was likely to be longer as the Liverpool players returned to the pitch to warm up.

There were still large sections of empty seats in the official Liverpool end of the 80,000-capacity stadium at the time the game was supposed to start.

Some 6,800 security forces were deployed for the event, with between 30,000 and 40,000 Liverpool fans without tickets for the final expected in Paris.

A fan zone with a capacity of over 40,000 was set up for them on an avenue in the east of the French capital.

Around 20,000 fans of each club were officially allocated tickets for the game.

This is now the scene at Gate A at Stade de France. Fans queuing patiently to get in but queue barely moving. pic.twitter.com/VV7Eh9sbXH

There’s been a long delay at the Champions League Final due to fans trying to jump over fences to get in ??‍?? #UCL #UCLFinal pic.twitter.com/teV4WxrsES

We live in a world where facts and fiction get blurred
In times of uncertainty you need journalism you can trust. For 14 free days, you can have access to a world of in-depth analyses, investigative journalism, top opinions and a range of features. Journalism strengthens democracy. Invest in the future today. Thereafter you will be billed R75 per month. You can cancel anytime and if you cancel within 14 days you won't be billed.
Subscribe to News24
Next on Sport24
Liverpool and Real Madrid ready for Champions League final rematch