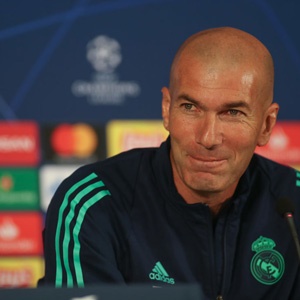 Cape Town - Real Madrid head coach Zinedine Zidane insists his charges will not look past Club Brugge despite having already secured a spot in the Champions League last 16.

Pool A leaders Paris St Germain can not be overtaken in the final round of group games, while Brugge and Galatasaray are fighting for Europa League qualification.

Zidane fears that Real will pay the price if they fail to take Brugge seriously.

"The message is always the same and that's that we want to put in a good performance. That's all there is to it," the Frenchman told reporters.

"I don't like friendly games. It's a Champions League game and our reputation is on the line. We always want to play good football and keep our good run going.

"Not on account of the result, which is down to our good performances, but because we want to play well and do things properly. If we don't approach it in that way, things will go badly.

"It'll be a really tough game. Brugge are playing to qualify for the Europa League as the third-placed team, but for us it's a Champions League game and not a friendly.

"That's why we want to win it, but we know just what a quality side the opposition are. We're ready. Some of them will play, now is their time."

We live in a world where facts and fiction get blurred
In times of uncertainty you need journalism you can trust. For only R75 per month, you have access to a world of in-depth analyses, investigative journalism, top opinions and a range of features. Journalism strengthens democracy. Invest in the future today.
Subscribe to News24
Related Links
Striker Emiliano Tade released by Sundowns
Galtier feels Chelsea draw was attainable
Lampard hints at striking reinforcements in January transfer window
Next on Sport24
UEFA plans for Euro and Champions League unchanged despite pandemic fears